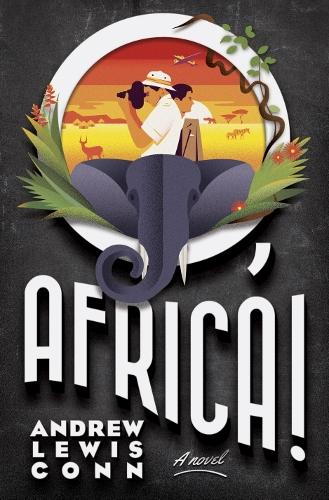 In the 20th century, three minority groups comprised the Other in American life: Jews, blacks and gays. At separate times, using different methods and with varying success, each group sought to move from discrimination, segregation and secrecy toward the mainstream.

These groups, with their double lives, coded language and outsiders’ view of their own country, shared something else in common: an outsized influence on American culture. In O, Africa! novelist and film critic Andrew Lewis Conn sets this triumvirate of strivers against the backdrop of the silent film era in its final days.

The result is a story that often feels more contemporary than period as it explores the Otherness of its characters and the power of film to shape a culture. Micah Grand, son of Jewish immigrants, is the propulsive force in this book.

A second-tier film director of slapstick comedies, Micah is all impulse, given to Dionysian enjoyment of food, drink and women, so much so that his sporadic attention to his wife and young sons has come to be called, in radio parlance, “a special guest appearance.” Micah is clearly an incomplete and damaged man.

So, too, is his twin brother, Izzy, cinematographer on Micah’s movies and a repressed homosexual. Where Micah is irrepressible, Izzy is withdrawn, preferring to see the world through the filter of a camera lens. Completing this triangle is Micah’s mistress, Rose, an African American woman whose light skin allows her to pass as white.

Conn isn’t particularly interested in historical fidelity. He has set down his 21st-century concerns in the Prohibition Era, but O, Africa! largely feels contemporary. The writer has said that he didn’t want the novel to feel “like an Old Time nostalgia trip,” and there is nothing sepia about this book. Micah’s very earthiness – and Conn’s – sees to that.

But sometimes the period reminders are distracting. And I found myself wondering whether this or that period detail was an anachronism – like popsicles, which Micah recalls as a childhood pleasure, but hadn’t been invented yet.

Those concerns disappear when the story moves to the heart of darkness in Africa, a less-known territory for readers, where the characters leave the modern world, and the concepts of history and progress, behind.

It takes a while before the reader, caught up in an early 20th-century Jewish immigrants’ tale, begins to learn why Africa is in the title. With the sound era threatening the solvency of silent picture studios, Micah’s boss concocts a plan to send the brothers and a crew to Africa to shoot nature scenes that the studio can then license to other filmmakers. While there, Micah, Izzy and Co. will also shoot another comedy.

And then there’s another script to be shot, foisted on Micah by Mr. Waldo, an ageless Harlem gangster to whom Micah owes a sizeable gambling debt. Mr. Waldo’s script is an explosive retelling of the African American experience from Africa, through slavery and Jim Crow, ending with the hope for a brighter tomorrow sealed by an interracial kiss.

Up the Congo River travel the Grand brothers and their crew – “a gallery of misfits,” Izzy thinks – and then overland until they reach the land of the Malwiki, a place untouched by modernity and so poised to be changed beyond recognition by the film crew in their midst. While the experience changes everyone, it is perhaps Izzy who is the most profoundly moved, as he finds himself for the first time immersed in a culture that has no concepts of gay or straight.

And it is he who is most devastated by the chain of events the mob of misfits sets into motion, returning to America and losing the self he found in Africa. O, Africa! might not inspire such self-revelation in readers, but it is a trip worth taking.