In May, the creators of the popular TV show “Shtisel” announced that they would be making a third season. In June, we learned that filming had been delayed, due contractual issues with the actors.

There have been no new episodes about everyone’s favorite haredi Israeli family since 2016. Here’s what some of the actors and crew have been doing.

Several “Shtisel” actors, including Michael Aloni who plays Akiva Shtisel, are starring in the HBO miniseries “Our Boys.” It tells the story of the death of 16-year-old Palestinian Abu Khdeir as revenge for the kidnapping and murder of three Jewish teens. It runs through October.

“Shtisel” cast and crewhave hosted discussions about the show, where they’ve been answering fans’ questions about what it was like to make a series about observant Jews.

Actress Shira Haas, who plays Ruchimi Weiss, donned her tichel (head scarf), once again for the Netflix production “Unorthodox,” about an Orthodox woman who leaves behind her religious life in New York for a secular life in Berlin. The show will air next year.

“Shtisel” creators Ori Elon and Yehonatan Indursky recently came out with a six-episode miniseries called “Autonomies,” about a dystopian Israel divided into two states — one secular and the other religious. It focuses on two families fighting over a young a child. The show was featured in the New York Jewish Film Festival.

Nobody has begun working on Season 3. During one of the “Shtisel” talks last month, producer Dikla Barkai said, “We cannot confirm Season 3 yet. There are many reasons. Let’s hope. We are thinking positively. I would say it will.”

Even though the new season of “Shtisel” may never happen, Amazon Studios is still working on an American remake of the show, to be called “Emmis” — Yiddish for “truth.” 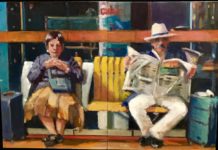