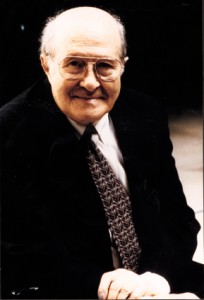 Herman Taube, a poet and journalist who turned his experiences during World War II into literature, died Tuesday at the age of 96.

Taube was born in Lodz, Poland, and was raised by his grandparents. He briefly served as a medic in the Polish army before Soviet forces captured and imprisoned him and his fellow troops on Sept. 17, 1939. Following his release by the Soviets, he joined the Second Polish Army in Uzbekistan. After being injured in 1944 when his ambulance drove over a land mine, Taube worked in the Majdanek hospital, treating those who survived the Nazi retreat from the death camp. He then moved to working at the hospital in Pomerania until the war ended. He married Susan Strauss, a Holocaust survivor, and the two moved to the United States.

Diane Saltzman, director of survivor affairs at the U.S. Holocaust Memorial Museum, where Taube volunteered, said, “Herman Taube exemplified the resilience of the survivors, tirelessly advocating for them and educating so many about what had happened. Remarkably, he never lost his appreciation for beauty and throughout his life continued to express himself through words and poetry. His family meant everything to him, and his joy for life was infectious to everyone who met him.”

“Herman Taube has remembered and transmitted,” Berenbaum wrote. “He has borne witness and has been as able a servant of the Jewish future as he has been a messenger of the tragic and fabled Jewish past.”

Taube wrote nearly two dozen books, most of which were books of poetry. One, Surviving Despair: A Story About Perseverance, chronicles Taube’s experiences in World War II, the Holocaust and beyond. Of that book, Rabbi Stuart Weinblatt of Congregation B’nai Tzedek wrote, “Herman Taube has the unique ability to make inanimate objects come alive. Every word and, at times, each syllable that he writes, reverberates with the consciousness of Yiddishe Neshome (Jewish soul).”

Author Elie Wiesel wrote of Taube’s poetry: “His vision roams over many continents, countless diverse subjects, and a variety of characters. Everywhere he finds a word, an expression, a sound, a thought, a proper noun and together they start singing and form a poem. These poems belong to the never-to-be-forgotten witness literature of our time.”

On his 95th birthday, Taube wrote a poem to his family and friends reflecting on his life and his many accomplishments. The poem ended with:

“Having reached – thank God – 95, beyond all my/imperfections, health problems, the absolute love/between my family, [wife] Susi, and my friends, I thank God/for reaching this joyful day. You are all the source of/my strength and inspiration./I pray for your health, everlasting joy and happiness/to all of you./Love, Popsi.”

Funeral arrangements are being made by Sol Levinson & Bros. Inc., and the ceremony was slated to take place Thursday at 1 p.m. at the Levinson Chapel in Pikesville, officiated by Rabbi Stuart Weinblatt and Rabbi Steven Suson of Congregation Har Tzeon-Agudath Achim. Shiva will take place at The Grovesnor, 10500 Rockville Pike in Rockville, beginning Thursday at 7 p.m. and continuing through Tuesday.