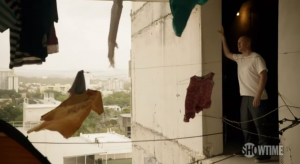 Fun fact: The Tower of David is a real place. While it’s an ancient citadel in Jerusalem’s Old City, the tower this episode referred to is also a real place, much to my surprise.

Maybe I’m not up to date on my Venezuelan history, but I had no idea that the abandoned tower is actually the world’s tallest slum.

Everything Dr. Fabulous (the guy who stitched up Brody) said in this episode was true. David Brillemboug, the tower’s investor, did indeed die in 1993, and the once glamorous skyscraper was never completed due to the Venezuelan banking crisis. Now, the abandoned tower in Caracas is home to more than 2,500 residents, including an unlicensed dentist.

The episode was actually filmed in Puerto Rico, but the fact that the slum actually exists (and was portrayed quite realistically) is fascinating. As for the actual episode itself; not as fascinating as my revelation, but still pretty decent. Season 3 hasn’t been very exciting, but I have a feeling that these initial episodes are building up to something big.

Brody family update: We were spared Dana’s saga of pouting and hooking up with Leo and we actually got to see what the man of the house was up to.

Brody has been moving place to place ever since Carrie hooked him up with a fake identity, and his final resting spot (supposedly) turned out to be none other than the Tower of David. And boy, does he hate it.

I mean, who wouldn’t, with its sketchy figures, prostitution, machine gun-slinging kids and overall griminess. But really, what did Brody expect? To live out his days partying it up in Cabo?

His reality is he’s the most wanted man in America and everyone wants $10 million, so they’re out to either kill him or turn him in. Columbians tried to kill him offscreen, which brought him to the tower and El Nino, who somehow has a connection to Carrie. Dr. Fabulous managed to perform a highly unorthodox surgery to get rid of two bullets in his gut, and then had him injected with heroin to relieve the pain.

While in recovery, he was robbed (obviously) and then his robber was killed for it. Essentially anyone who says they know who Brody is will end up dead, as we found out later in this episode when he escaped to a mosque with the help of Esme, El Nino’s daughter who’s already taken a liking to him. The imam let Brody stay, but it turns out he was just kidding because nobody wants to harbor a terrorist. This led El Nino’s men to kill the imam and everyone else inside the mosque.

Thus, Brody is living a life where he’s indirectly killing people and is now chained up in a dungeon where he’ll probably become a heroin addict. And we thought Dana had problems.

Carrie Land: Carrie has been in the psych ward for three weeks and as expected, she’s completely miserable. She wants to forgive Saul for outing her affair/bipolar disorder but she’s still too unstable for everyone to let her do anything that involves contact with the outside world.

Some good news is she’s made a friend! Sort of. A nurse has been giving her intel on a mysterious visitor.

She thought it was Saul, but it turned out to be a man from a law firm, who may or may not want to pit her against the CIA. Carrie didn’t know what to make of this, but regardless, it was too much to handle. The guy could’ve been trying to turn her against the U.S. and into Brody 2.0 for all she knew, and she wasn’t about to get into that situation. So, for once, Carrie willingly took her meds.

Best moment: The very end. Not because the episode was over, but because Carrie and Brody’s juxtaposed positions (sitting alone in a dark corner) showed just how alike they are, despite being a continent apart. They’re soul mates!

A journalistic lesson that needs to be learned again

‘The rocket sirens were blazing’