From the time he was a young man living in Turkish-controlled Palestine, David Ben-Gurion believed that Arab hostility to a Jewish state was implacable, and therefore that the fewer
Arabs living in Jewish parts of Palestine and later in Israel, the better.

That was one of the major themes pursued by Tom Segev — author of the recently published book “A State at Any Cost: The Life of David Ben-Gurion” — during his talk last week at the American University School of International Service. The talk was sponsored by AU’s Center for Israeli Studies.

B-G, considered “the father of the Jewish state,” once said that all observers agree that relations between the two nations are difficult. However, he continued, “not everyone sees there is no solution to the problem. Two nations are facing off against each other — we want Palestine, they want Palestine, we want it to be ours as a nation, they want it to be theirs as a nation.”

His attitude was formed early when, as a young man working at the Sejera settlement in the lower Galilee, Ben-Gurion felt the loss of two fellow Jewish farmers who were killed during an Arab raid, He wrote to his father that “all the Arabs around, upon sensing our weakness, began provocations and other actions… .”

He told two other stories throughout his life to justify his stance toward the Arabs living in the Land of Israel.

When he was forced to leave the country during Turkish rule, an Arab acquaintance told him that as a friend, he was sorry to see him go, but as an Arab, he rejoiced.

When he explained to a wealthy Arab official, Musa al Alami, that the Zionists’ arrival in Palestine would raise all residents’ standard of living, Alami’s response was that “he preferred to leave the land poor and desolate for another century until the Arabs could develop it themselves.”

Those stories were meant to support his thesis, according to the author, that “there was no basis for an agreement with the Arabs or, as he once said, ‘there’s no address.’ ” 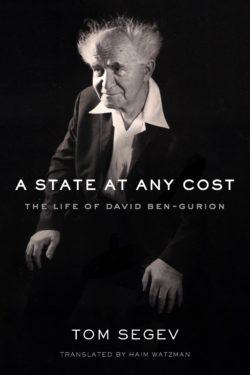 Ben-Gurion’s ideas helped in part to create the Palestinian refugee problem, Segev believes. “The Arabs left, the Arabs escaped, the Arabs were forced to escape and the Arabs were driven out [during the War of Independence],” he says. “In my book, I use all these terms purposefully because they are all true.”

While there is continuing debate about that period, what is clear is that Israelis did not permit those Palestinians who had left to return, Segev stated.

Israeli Prime Minister Benjamin Netanyahu continues B-G’s policy toward the Arabs, according to Segev. For example, every time there is an attack from Gaza, some Cabinet ministers demand that Israel occupy that territory. So far, Netanyahu has resisted that request, knowing that such a move would mean becoming responsible for hundreds of thousands of Arabs.

Whatever his ideas about Arabs in Israel, Ben-Gurion’s actions have promoted the current prosperity in the Jewish state, the author noted.

At the end of 71 years of existence, Israel is one of the biggest success stories of the 20th century. If you look at the statistics put out by the U.N. or its agencies, Israel usually ranks among the top 15 countries, which means that most Israelis live better lives than most other people, and they live in a democracy. Israel is strong enough to defend itself and is a high tech superpower.

His legacy is not limited “to the fact that he led the struggle for the establishment of Israel,” the historian asserted.

What he did was to lay the foundations for Israel to be what it is today.

However, the author noted, Israel has not succeeded in two areas in which Ben-Gurion also failed: “First of all, life in Israel is without peace. The second problem is the inability to agree on a common Jewish-Israeli-Zionist identity. He was unable to define the meaning of the Jewish state or who is a Jew or who is an Israeli,” and the Jewish state also has not made much progress in those areas.

Segev enjoyed the process of writing about Ben-Gurion, who he found to be “an amazingly complex character.”

The Israeli leader started writing his diary at the age of 14 and wrote something almost every day until the end of his life. He often wrote in real time, the author said, meaning that some people who met him said they only saw the top of his head for he was writing all the time.

“I discovered a man who could also be romantic, a nature lover. His diary is full of beautiful descriptions of nature — sunsets in Palestine, Niagara Falls, the Swiss Alps.”

And B-G was astute. In February 1947, he had a meeting with Oliver Stanley, the leader of the Conservative Party, at the Dorchester Hotel in London. They met in the lobby, and Stanley advised him not to take off his coat because the hotel was unheated.

Afterward, the Israeli leader concluded that if there was not enough fuel to heat the most expensive hotel in Europe, then the British Empire is sinking and won’t stay in Palestine for long.

Ben-Gurion is criticized today for his concessions to haredi Orthodox Jews about serving in the army and giving them control over many areas of personal life. Actually, around the time of the War of Independence, many haredim feared that the secular Jewish state would make it impossible for them to live their lives, and B-G feared a cultural war might break out. He understood that reaching a compromise with the Orthodox was essential.

In any case, concessions to the haredi-Orthodox had begun long before, during the elections in 1920 to the Jewish Assembly of Representatives, the institution that represented the Jews of pre-state Palestine. The haredim refused to take part in the elections because women were permitted to vote and be elected to office.

After long negotiations, women were allowed to vote and hold office. However, as it was expected that Orthodox women would not take part in the balloting, their husbands were given two votes apiece.

Ben-Gurion had a rigorous idea of what Zionism and Zionists were. Zionists, he believed, packed their bags and came to live in the Jewish state.

Segev tells the story of a wealthy Chicago Jew who told B-G that he had built a magnificent villa in that city, which he called Villa Eretz Yisrael (the Land of Israel). B-G said he wished the man had a fantastic house in Israel and called it Villa Chicago.

But he also understood the importance of having Jews abroad who would support Israel financially and politically.

“The more secure his positions as a local leader in Palestine became, the more Ben-Gurion was inclined to stress the duty of Jews overseas to assist in the realization of the Zionist project, even while remaining in their own countries,” Segev writes in his book.