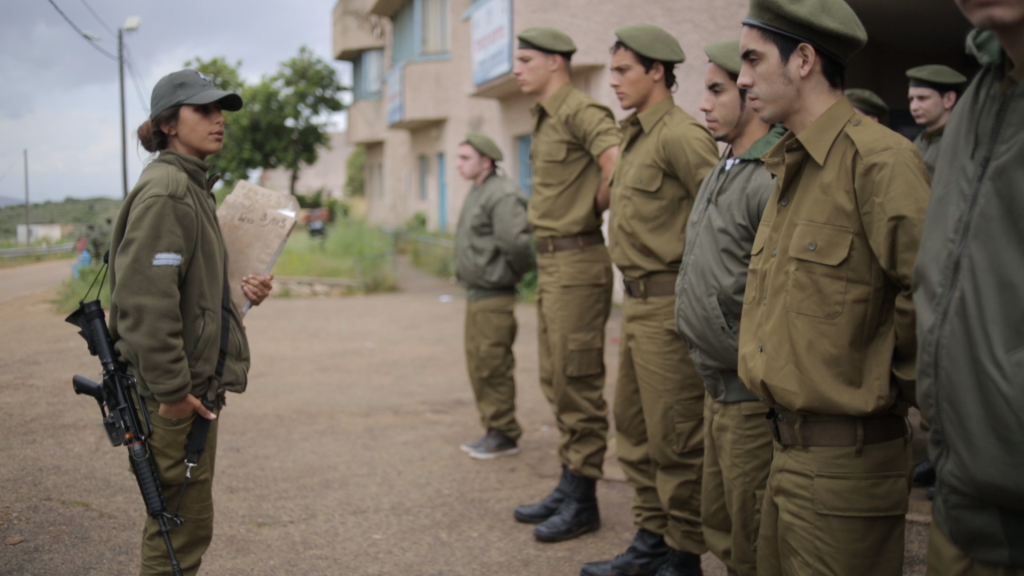 “It’s so weird that you’re a commander now.”

That’s according to a friend of Coral Amarani, a young Israeli soldier featured in Beneath the Helmet, the latest advocacy film from Jerusalem U. Amarani says she grew up a “spoiled girl” with a sheltered life. Now, she is responsible for helping prepare immigrants to be Israeli soldiers. As with her peers, who pick up a weapon for the first time at age 18, Amarani grew up fast.

Yet in Israel, where universal military service is the law, for a young woman like her to be in a position of command is hardly “weird.”

Beneath the Helmet shows the human face of the IDF – the soldiers and the double lives they lead in and out of their units. The film was screened last Thursday night at the Jewish Community Center of Greater Washington in the Kreeger Auditorium. Jerusalem U’s mission is to promote a positive image of Israel through feature films. The screening was followed by a talk and panel discussion, including Aviv Regev, a paratrooper lieutenant appearing in the film.

With a remarkable level of access, the filmmakers followed a handful of IDF
recruits as they endured paratrooper training for more than eight months. That is the IDF we see in Beneath the Helmet. The film opens with the training of a new platoon of recruits led by paratrooper commander Eden Adler. Only a few years older than his platoon members, Adler is portrayed as both a serious military leader and a compassionate and approachable mentor.

The training regimen is a familiar one. The recruits are drilled hard, they name and sleep with their weapons, and are screamed at by their instructors. But unlike in, say Kubrick’s Full Metal Jacket, which shows a process that obliterates the humanity of young men, Beneath the Helmet shows an experience where soldiers’ humanity is enhanced. The young Israelis immediately accept the realities of military service, and each hardship seems only to heighten their sense of purpose. It’s an experience that is shown as redemptive, empowering – thoroughly Jewish.

“Film creates your reality,” Andrea Gottlieb of Jerusalem U told the audience prior to the screening.

“Our goal is to create an emotional connection.” Indeed, it’s impossible not to feel emotional when, for example, seeing how the young soldiers respond to the needs of their comrade Mekonen Abeba, an Ethiopian immigrant with financial struggles.

News stories about the IDF usually involve tragedy and controversy. The Israeli military and its actions are the subject of constant international criticism; but for Israelis, the IDF is what makes daily life possible. The film is an effective piece of hasbara largely because it is, at least on the surface, apolitical. That’s an accurate reflection of IDF life, according to Aviv Regev.

“The film is really how the army is,” says Regev. “No one [talks] politics in the IDF.” Regev, who is 24, is working with Jerusalem U to promote Beneath the Helmet throughout North America.

Dealing with the loss of a comrade is the film’s one glaring omission about life in the IDF, says Regev, who happily has never lost a soldier in his command. “And,” he adds, gratefully, “I have not killed anyone.”

Handsome, intelligent, and moral, Regev makes an excellent ambassador for the filmmakers’ cause.

Beneath the Helmet is notably free of any combat or casualties, though the dangers of the job are discussed openly among the soldiers and their families. Hearing directly from these young soldiers and watching them come of age together represents a brand of Israel advocacy that critics may find hard to refute.