Chuck Harris never got to meet his Uncle Charley. His father’s younger brother was said to be a musical prodigy before tuberculosis cut his life short when he was 25. Harris never heard Uncle Charley play banjo with the jazz bands of 1920s Harlem, but he can imagine it.

Each book took Harris about three years to complete. He does months of research on each subject before ever putting pen to paper. But historical documents can only tell so much, with many details lost to time. So Harris tries to envision the daily lives and conversations of people long gone for his historical fiction.

“I spent my career basically writing nonfiction. I wanted something different,” said Harris, 79, a member of Beth El Hebrew Congregation in Alexandria. “And in my own reading I gravitate toward historical fiction. I just loved the way people will spin stories out of actual events. And you learn, in some ways, more insightful things in fiction than you do in nonfiction because you get to be sort of in the heads of the people who are living the events.”

Harris uses vivid descriptions of scenery, dialogue and fictional characters to tell his stories revolving around real people. He wrote “Mr. Chen’s Sweet and Sour” to read as a memoir authored by his father Morey. Most of the book is based on a 90-page document Harris’ father created detailing his brother Charley’s life. The typed-up packet lists every gig the two played along with event programs, sheet music and train tickets. Harris said the information was extensive and well written.

“I couldn’t find one typo in it, it was kind of amazing,” Harris said. “And that was my springboard to the novel.”

Harris also does onsite research. He toured Harlem and visited the tuberculosis sanatorium where his uncle died, and the gravesite where he was buried. He spends about two hours each morning writing. His goal is to write about 1,000 words a week. Harris’ first book is about 48,000 words while his second is roughly less than 60,000.

“Crazy Blue” was published in March. Harris said he was drawn to Smith because of her connection to Jews. Her third husband, Jack Goldberg, was Jewish and her biracial pianist, Willie “The Lion” Smith, was a cantor for a Black Jewish congregation in Harlem.

“[Mamie Smith] was incredibly versatile and a great entertainer,” Harris said. “And she was quite a hit in the ‘20s, even though she is now forgotten.” 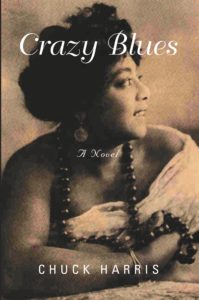 Harris said he has always had a fascination with the intersection of Jews and Blacks. As a sociologist he specialized in race and ethnic relations. He attributes the interest to coming of age in the Civil Rights movement while attending Duke University.

“I was a naive kid from the North, and I just saw things playing out in North Carolina that were new to me,” Harris said. “And that triggered my interest in race relations.”

Harris calls 1920s Harlem “a place of total acceptance” filled with clubs and “this just loose and open relationship between racial and ethnic groups.” It’s something he hopes to capture with his two novels. But the real driving factor behind Harris’ work is a love of the process.

Harris worked as a sociologist at Marymount University until retiring in 2014. He subsequently took up creative writing to keep busy. He refined his craft at community classes and workshops where he learned to compose dialogue and write actively.

“It was an evolving process,” Harris said. “And I learned from my fellow writers and from the instructors how best to capture the story.”

Harris is working on his next book, a short story collection based on the Jewish history of his hometown, Syracuse, N.Y. His working title is “Salt City Stories,” a reference to the city’s nickname.

“I love writing,” Harris said. “I just like the idea of thinking of things in my head and putting them on paper and having other people read them and react.”