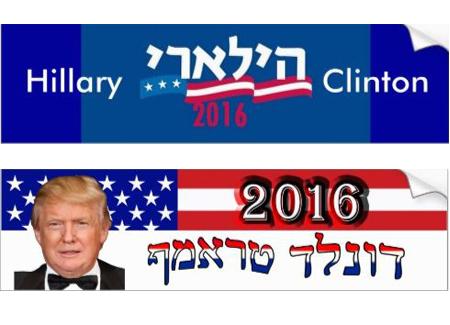 Every four years, rabbis wrestle with the question of whether to discuss the presidential election in their sermons on the High Holidays, when their largest crowd of worshippers is in synagogue to hear their thoughts on timely subjects.

But there is little that is as divisive as politics. And for a rabbi who wants to unify a congregation, this election year is particularly perilous.

“In every circumstance, a rabbi has to make the determination of three things,” said Rabbi Jack Moline, rabbi emeritus of Agudas Achim Congregation in Alexandria. “First of all, is this message appropriate to the spirit of the day? Secondly, is this something that the people listening to me need to hear, and third, way behind the first two, is this what I need to say? Once you answer those questions, that decision falls into place.”

Moline is no longer a pulpit rabbi, but his colleagues who are polishing their sermons are considering how to respond to a presidential election that is “especially contentious,” as Rabbi Stuart Weinblatt puts it.

Weinblatt, who leads Congregation B’nai Tzedek in Potomac, said he is still trying to determine how to address it. Normally he uses his election-year sermons as an opportunity to explain the importance of voting, including why it is a mitzvah, or religious requirement. But this year is different.

“Unfortunately one of the candidates who is running for national office for the first time has focused on personalities and issues,” he said.

He won’t say Republican presidential candidate Donald Trump, who faces Democrat Hillary Clinton on the November ballot, by name. Rabbis have to be careful.

That’s because a congregation runs the risk of losing its tax-exempt status as a “religious and apostolic organization.” Such organizations are not allowed to endorse candidates, but may advocate for certain issues.

Rabbi Charles Arian of Kehilat Shalom in Gaithersburg said he understands the logic behind the federal tax code’s requirements. “If you are giving a sermon, than presumably you are speaking on behalf of the institution,” he said. “And you are using the resources of the institution to support a particular candidate.”

Arian has taken his own advice to heart. He refrains from even posting anything “even remotely dealing with the election” on his Facebook page “because I just think there is so much ugliness in the election season.”

Yet he will discuss candidates’ positions. Last Yom Kippur it was about Trump’s controversial statements about Muslims.

“Sometimes you have to stand up for what you believe,” he said. “I mentioned Trump’s positions, but I never said, ‘Don’t vote for Trump, and don’t vote for [Ben] Carson.’”

Weinblatt said his congregation is composed of Jews from across the political spectrum — and he said he’s been criticized for being both “too conservative” and “too liberal.”

“That’s one of the reasons so many of us are tiptoeing through this landmine,” he said, “because we don’t want to make it seem like we are favoring one particular candidate.”

Even when you think it’s called for.

That was the lesson Moline learned during the 1988 presidential election season, when he mentioned Republican candidate George H.W. Bush’s controversial “Willy Horton” ad that implied Democratic candidate Michael Dukakis was soft on crime.

“I ad-libbed in the sermon something about George Bush and Willy Horton that was entirely inappropriate,” said Moline, who now heads the Interfaith Alliance. “It didn’t sit well with people.”

He added, “With the exception of endorsing a specific candidate, there is no topic that is off limits. I never worried about dividing the congregation. No matter what I said there would be people who disagreed with me.”

How many opinions could 2,700 Jewish synagogue members have? That’s how many Rabbi Bruce Lustig of Washington Hebrew Congregation addresses on the High Holidays.

“I’m a firm believer that people do not come to synagogue to hear about politics,” he said. “That doesn’t mean that some of the issues that are part and parcel of our society won’t be addressed.”

That’s Rabbi Amy Schwartzman’s approach. Schwartzman, of Temple Rodef Shalom in Falls Church, said she will not discuss politics this year, but in past years has talked about Israel, healthcare, ethics in the public sphere and poverty in her sermons.

“My goal is to mine an issue by going deeper into Jewish sources in order to see what would be the guiding principles,” she said. “It isn’t that I’m looking to assess the next bill that’s coming into Congress.

I’m looking into the midrash to see what Judaism calls us to do. Every good sermon is a sermon to yourself, and as a rabbi I think you have to be working from a place that’s deep inside you.”

Rabbi Nissan Antine of Beth Sholom Congregation and Talmud Torah in Potomac said he does not talk about elections under any circumstances, as he believes doing so would violate rabbinic tradition.
“I feel that I don’t want to be saying things from the pulpit that will make people not able to see me as their rabbi anymore,” he said.

Antine added that he occasionally addresses underlying Jewish values of issues such as healthcare, but only if they are ones that are universally shared by Jews of all backgrounds. He says it would not be unprecedented to mention a candidate by name in a sermon, but it is not warranted this year.

“I’m not going to say that a rabbi should never speak out on a political issue, but I just think that a rabbi has to weigh very carefully the degree of anger and alienation they will have.”