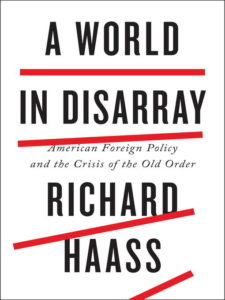 Academics with one foot in the real world generally seem more knowledgeable, more convincing than their strictly ivory tower counterparts. Maybe it’s because they’ve been forced to get their ideas dirty as they are implemented in the muddy mosh pit that we call life.

Possibly, it’s because these scholar-practitioners have had to translate their views from “academic speak” to English so that policymakers understand their options.

For whatever reason, Richard Haas — senior White House adviser to President George H.W. Bush, director of the policy planning staff under Secretary of State Colin Powell and currently president of the Council on Foreign Relations — has written a book that is conceptually clear and intellectually seductive. And his theories come with a heavy dose of international reality.

On the nitty-gritty of international politics, Haas writes:
•    President Barack Obama was right in establishing a “red line” on chemical weapons in Syria, but wrong not to
have acted when that line was crossed.
•    U.S. treaties with Japan and South Korea are important, for without them, those countries might try to acquire nuclear weapons. If they had nukes, the chances of war between the two Koreas or Japan and China would “rise substantially.”
•    There’s little chance for a Mideast peace in the near future. The current Israeli government is not ready to make sufficient compromises, the Palestinians running the West Bank are politically weak and Hamas, which governs the Gaza Strip, is un
interested in peace with the Jewish state.

But “A World in Disarray” is really about theory, about systems of world order. World order, Haas notes, is a description of the nature and rules of international relations at any given time. The order in place since the end of World War II is unraveling. One sign was Brexit, the British vote to leave the European Union. (An even more convincing signal was the election of President Donald Trump, but this book was written before the election.)

“What we are witnessing is a widespread rejection of globalization and international involvement,” the scholar writes, “and, as result, a questioning of long-standing postures and policies, from openness to trade and immigrants to a willingness to maintain alliances and overseas commitments.”

That post-World War II system — Haas calls it World Order 1.0 — was based on the Cold War, which ended with the breakup of the Soviet Union. What characterized it was bipolarity (the supremacy of the Soviet Union and the United States) and a respect for sovereignty, including nonintervention in the internal affairs of other nations.

But the world today is no longer controlled by two nuclear superpowers. In addition, many new problems have arisen during the past 25 years that have challenged the old idea of sovereign states’ inviolability in their internal affairs. What if a nonstate actor like ISIS seizes control of territory of a sovereign state? What if states act in such a way that makes other countries and their citizens suffer, such as is the case with global warming?

In addition, the experiences of Yugoslavia, Somalia and Rwanda in the 1990s posed another question: Should the international community act if a state fails to provide security to its own citizens?

As a result of the atrocities committed against civilians, the United Nations convened a “World Summit” in 2005, which gave birth to the idea (“Responsibility to Protect” or R2P) that State A and the international community have an obligation to protect State B’s citizens from various crimes against humanity when State B is unable or unwilling.

“It seemed as if the concept of world order had taken a major turn, now embracing not just external behavior of states but their internal actions as well,” the author notes.

So, Haas argues, we need rules for a new international order (World Order 2.0), which recognizes the new reality. Sovereignty will still be a pillar of the new order, but it will be more limited.

He calls for sovereignty “that embraces not just the rights but also the obligations of sovereign states vis-a-vis other governments and countries.” He call this new concept “sovereign obligation.”

How and when to intervene in the affairs of other states? This issue will have to be “approached on a case-by-case basis,” Haas concludes.

Some parts of the traditional order would carry over in a sovereign-obligation world. These include “respect for borders and a commitment not to use military force or other coercive means to change them.”

Whether the new Trump administration, which has not shown much interest in international cooperation, is capable or willing to be a midwife for legitimatizing the new system is in serious doubt.

Unfortunately, absent American leadership, chaos and conflict may characterize international affairs during the Trump presidency and beyond.