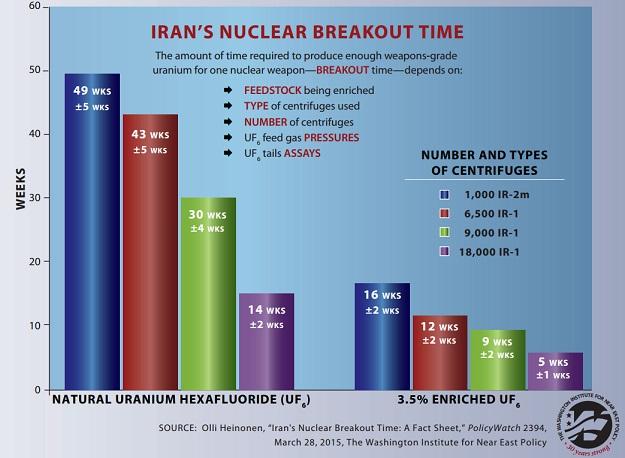 Reports say that Washington may reach a nuclear accord with Iran in coming days. Here, the writer answers pressing questions about Tehran’s program and how an agreement might affect its nuclear capabilities.

What is the commonly accepted definition of breakout time?

This is the time required to produce enough weapons-grade uranium, known as WGU, for one nuclear weapon. To produce WGU, uranium needs to be enriched (e.g., with centrifuges) to more than 90 percent of its fissile isotope U-235. The amount of WGU required for one weapon is defined by the International Atomic Energy Agency, or IAEA, as about 27 kg of uranium. This amount is often called a “significant quantity” and referred to as SQ.

What is Iran’s current breakout time?

Natural uranium has only 0.7 percent of the isotope U-235, and the effort required to enrich it to one SQ of WGU is about 5,000 Separative Work Units, or SWUs. Iran currently has about 9,000 functioning first-generation IR-1 centrifuges, with another 9,000 not in operation. The IR-1s installed in the Natanz and Fordow facilities have been performing at an average per unit rate of 0.75 to 1 SWU per year. Using the 1 SWU/year performance of the latest IR-1 model, the breakout time with 9,000 machines using a natural uranium feed would be six to seven months. However, Iran also has substantial stocks of 3.5 percent enriched uranium hexafluoride (UF6) that can be used as an alternative feed, shrinking the breakout time to three months.

If Iran brought online its other nearly 9,000 IR-1s, breakout time would be about three months with natural uranium feedstock and four to six weeks with 3.5 percent UF6 feedstock. Iran has also developed the more advanced IR-2m centrifuge, rated at 5 SWU/year. If the 1,000 IR-2ms installed at Natanz were used in conjunction with all 18,000 IR-1s, the respective breakout times would be cut by a third.

According to media accounts, the proposed nuclear agreement would lower the number of operating centrifuges to around 6,500. In that circumstance, what would Iran’s breakout time be?

Using IR-1s with natural uranium as a feed, the breakout time for 6,500 centrifuges would be about nine months. A crucial question will be how much 3.5 percent enriched UF6 will remain in Iran. Yet even if UF6 stocks are reduced from their current 7.5-8 tons to 500 kg, a breakout time of between seven and eight months would still be possible given the program’s enrichment capabilities with natural uranium feed. Since these breakout times are less than the goals set by the U.S. administration, it is important to know what parameters Washington used for its estimates.

The administration says that one of the main achievements of an agreement would be to increase breakout time to at least a year. What else would have to be in the agreement to reach that goal?

The maximum allowed breakout time should be viewed as a combination of detection time and action time — that is, the time required to get Iran back in compliance with the agreement. Both of these times are difficult to estimate precisely because administrative delays and efforts to resolve disagreements could easily take several months.

How long is the detection time?

Detection time depends on Iran’s actions. If Tehran does not try to conceal what it is doing, the IAEA would detect a violation fairly quickly — in the worst case perhaps two weeks. The agency would then confirm the finding with Iranian authorities, and the IAEA Board of Governors would need another one or two weeks to take any formal action such as referring the issue to the U.N. Security Council. This would leave a reasonable amount of time for the international community to act.

If Iran tries to conceal what it is doing, much longer detection times are likely. As indicated in past IAEA reports, environmental samples play a pivotal role in confirming violations. Due to the large number of samples involved and the meticulous analytical process, the results would not be available for at least two months. And if samples show higher enrichment, additional samples have to be taken and analyzed. Although the second set of samples would certainly be fast-tracked, it is unrealistic to expect that process and subsequent clarifications by Iran to take less than another month. This would leave the international community with only three or four months to act, an extremely short time.

There are also plausible scenarios of misunderstandings or even differing interpretations of what constitutes a breach of the agreement. In such situations, Iran could drag the process out for many months.

Iran might also pursue a “creep-out” strategy, such as by slowly increasing its inventory of 3.5 percent UF6. This has already taken place under the interim Joint Plan of Action. When the JPOA was concluded in November 2013, Iran’s 3.5 percent UF6 stock should have been below 7.5 tons; any additional material existing or newly produced should have been converted to oxides. Yet none of the IAEA reports released since then indicate that the stock has been below that amount. This demonstrates the need for the United States and its partners to maintain vigilance in getting Iran to comply with an agreement.

The most difficult task is to detect a “sneak-out” violation in which Iran uses clandestine nuclear facilities. This scenario has several variants, including the possibility of an entirely separate, unreported enrichment cycle anywhere along the chain from uranium mining to enrichment. It is important that the IAEA be empowered to not only verify the completeness of Iran’s inventory of nuclear material, but also establish as a baseline the total number and location of centrifuges inside the country.

If an agreement does achieve a one-year breakout warning time, could a buffer be maintained?

Perhaps the most important factor is the research and development on more advanced centrifuges such as IR-5 or IR-8. Making such machines operational on a semi-industrial scale would likely take at least three years. If they are 10 to 20 times more efficient than the current IR-1 centrifuges as estimated, the breakout times would be much reduced.

Warning time could also be shortened if the IAEA is not allowed to fully exercise rigorous monitoring and verification procedures.

Olli Heinonen is a senior fellow at Harvard University’s Belfer Center for Science and International Affairs and a former deputy director-general for safeguards at the IAEA. Together with Washington Institute for Near East Policy fellow Simon Henderson, he coauthored Nuclear Iran: A Glossary of Terms, a joint publication of the Institute and the Belfer Center.

How the Abraham Accords took a different path 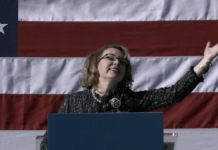