NEW YORK — Is Judaism the problem or the solution to women’s equality?

Try telling agunot, women who are chained to their husbands unable to obtain a get, a religious divorce, that they are equal to men. Overarching Jewish values like b’tzelem Elokim — that all people are created in the image of God — may teach equality, but the day-to-day reality of too many women tells us of a struggle that is far from complete.

Is the pervasive inequality of women in Israel and in many other societies God’s will or men’s will? The majority of God language in our liturgy and our sources is masculine, which some have argued is simply the result of the Hebrew language being gendered. But imagine the cumulative effect of boys and girls growing up hearing God referred to only as He, Lord, Father and King. As feminist theologians have pointed out, “If God is male, then male is God.” One could conclude — wrongly — that Jewish theology supports the privileged place of men in ritual and society.

Nineteenth-century leaders of Reform Jewry knew that Judaism needed to be updated. Liberal-leaning scholars and rabbis in Breslau in 1846 declared “the female sex” the “religious equal of the male” with regard to “obligations and rights.” They proposed expunging the prejudicial benediction “shelo asani ishah” (that God didn’t make me a woman) from the liturgy, obligating women to the same religious instruction and public worship as men, and raising the age of girls’ religious maturation from the traditional 12 to 13 to match that prescribed for boys.

In 1876, three years after Rabbi Isaac Mayer Wise founded the North American Reform movement, he insisted that “the principle of justice, and the law of God inherent in every human being, demands that women be admitted to membership in the congregation, and be given equal rights with men.”

Since 1972, when Sally Priesand was ordained as the first female rabbi by the Reform movement, 686 women have followed, 29 of whom were ordained in Israel by the Hebrew Union College-Jewish Institute of Religion. The Conservative movement’s rabbinical association has 307 female rabbis. And this month, three remarkable Orthodox women graduated from Yeshivat Maharat’s program for careers as spiritual leaders in the Orthodox community. This is changing our Jewish community and our practice of Judaism for the better, enriching both.

But this energy and ritual is missing in the Jewish state. The government of Israel has privileged Orthodoxy as the only legitimate Judaism. How painfully ironic it is that the only democracy in the world that embraces legal discrimination against the streams of Judaism that embrace equality of women is the Jewish state.

We know the great male sages of the Talmud — Rabbi Hillel, Rabbi Akiba and Rabbi Yohanan Ben Zakkai. But what about the unsung female sages?

For instance, Ima Shalom, mentioned in the Talmud, hails from a distinguished family. Both her father and brother headed the Sanhedrin, the ancient court of sages. Her husband, Eliezer ben Hyrcanus, also was a great scholar.

Ima Shalom, known for her keen intellect and wise sayings, said, “All gates are closed except the gates of wounded feelings.” She meant that God will always hear the prayers of those who have been wronged. Can you imagine how much richer our Jewish tradition would be if the Ima Shaloms had been allowed to sit on the Sanhedrin?

In growing numbers, Jews throughout the world are seeking to take the wounded feelings described by Ima Shalom and turn them into effective action. Tikkun olam isn’t only needed in the developing world or in places of overt oppression, but in Israel, too.

Last October on Rosh Chodesh Cheshvan, Anat Hoffman, the leader of the Israel Religious Action Center, the social action arm of the Reform movement, as well the chairwoman of Women of the Wall, was arrested and treated harshly for the crime of wearing a prayer shawl, a tallit, and praying the Sh’ma out loud at the Kotel.

Women’s struggle for equality includes the Western Wall, but our struggle does not end there — it is only the beginning of the fight for desperately needed changes.

Also among the gates of wounded feelings is the case of Rosie Davidian, a traditionally observant woman from the Negev. Rosie is a single mother who wanted to say Kaddish for her father buried in Ofakim. She also spent the night writing his eulogy. But at the cemetery there was a mechitza, a barrier, separating her from her brother and the other men attending the funeral.

At Rosie’s turn to speak, the officiating rabbi asked her brother to read the eulogy.

“In our tradition, women are not allowed to speak at funerals,” the rabbi said.

Rosie’s brother declined; it was their father’s wishes for Rosie to read. Still the rabbi refused and suggested that he read the eulogy. Rosie cried from behind the partition, “Are you going to say ‘my beloved father?’ ”

The Israel Religious Action Center took her case to small claims court and won. But how distressing is it that her claim is a “small claim?”

From the Western Wall, to rabbinical courts, to the bridal canopy, to the cemeteries, to the workplaces of Israel, women are not yet treated equally. Haredi Orthodox Judaism is a legitimate choice for those who choose it, but it must not remain the default position of the Jewish state.

As a country that aspires to be guided by Jewish values, the state of Israel must fight for the equal rights of women. As long as Orthodoxy is the only expression of Judaism deemed legitimate by the state of Israel, women’s equality will be elusive and illusory.

God didn’t decree the current inequality; men did. Judaism has changed throughout history. So, too, the state of Israel can change. The time for change is now.

Rabbi Rick Jacobs is the president of the Union for Reform Judaism. 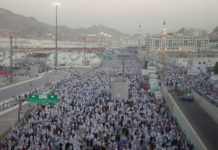