Speaking Monday at the bookstore Politics and Prose, Israeli author and artist Rutu Modan told the story of how when she was young and not always well-mannered at meals, her father would ask her, “What if the queen would invite you to Buckingham Palace?”

When her own daughter who at the age of 5 apparently was “eating like a piglet,” Modan echoed her father’s words, but her daughter responded that the queen was a good friend of hers “and she told me I’m eating perfectly okay.”

With that as inspiration, Modan wrote and drew Maya Makes a Mess, a graphic novel for young children that explores what happens when messy eater Maya is whisked away to the palace for a meal after her parents make the same warning. 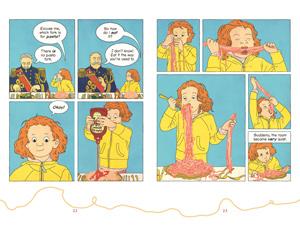 Modan told the story behind her new book as part of a panel of other graphic novel creators talking about the art and style of their work in a discussion led by author Glen Waldon.

Modan, a graduate of the Bezalel Academy of Arts and Design in Jerusalem, has been writing and drawing graphic novels for several years, with her first graphic novel, Exit Wounds winning an Eisner award for best new graphic novel in 2008.

Maya Makes a Mess is a much lighter book, her first for children, than that earlier story of an uncertain death in Tel Aviv. Maya handles the slightly surreal meal with royalty with panache, even if they are not as fond of pasta with ketchup as she is and the girl comes up with her own rules for meals.

The panel wandered over many topics and included the panelists drawing in two-minute increments on themes like family, panic and snack time but although each creator had very different answers for questions on technical, creative and other aspects of their work, Modan’s Israeli background stood out more than a little. When the topic of from whom they drew inspiration arose, Modan pointed out that for her it was almost exclusively as an adult that she was exposed to the medium.

“In Israel it’s really different from the U.S.,” Modan said. “I didn’t have this privilege to read comics as a young girl.”

When she became interested in sequential art and graphic storytelling, Modan said she found inspiration in creators like Winsor McKay, Daniel Clowes and Art Spiegelman among others, although she added that it’s sometimes hard to tell what inspirations may be filtering through her mind when she works.

“Sometimes the influence is not direct,” she said.

Spiegelman’s work Maus, however, did have a direct impact on her life as it wasn’t until then that she first learned that creating graphic novels could be a career and was just as valid a form of art and storytelling as other media.

“This was a huge discovery for me,” she said.

In the technical realm, too, the other artists expressed some surprise at how easy it is for Modan to get actors and models to help with her work.

“They acted the whole storyboard for me,” she said, referring to her other new book, Property, the story of an Israeli woman and her grandmother who travel to Poland ostensibly in search of property lost during World War II.

When one of the other panelists asked how she was able to find people to do that for her, she answered that she would just pick up the phone, joking that everyone lives in Tel Aviv anyway.

When it came to discussion about her style, Modan said she never really considers it when she works on her books.

“It’s always a surprise when people say I have a style,” she said. “It keeps changing all the time.”

Mostly that is due to her evolution as an author and artist, as she made it clear that although themes and topics, of course, differ in her adult works and her books aimed at children, the way she conveys her story and message doesn’t change for different audiences.

The key for her when writing for younger audiences is to remember what was important to her in books when she was very young.

“I used to like many details,” she said, adding that it’s important that if a character describes something drawn in the book, it should match up in things like number, color and so on.

That’s not to say that comics aimed at children cannot be appealing to adults and vice versa, Modan said.

“Comics is not so divided into age groups,” she said, explaining that even if a younger person read her work, he or she would have a different understanding of the material, which can arguably be more flexible than prose in how it’s interpreted.

“They read the pictures,” Modan said.