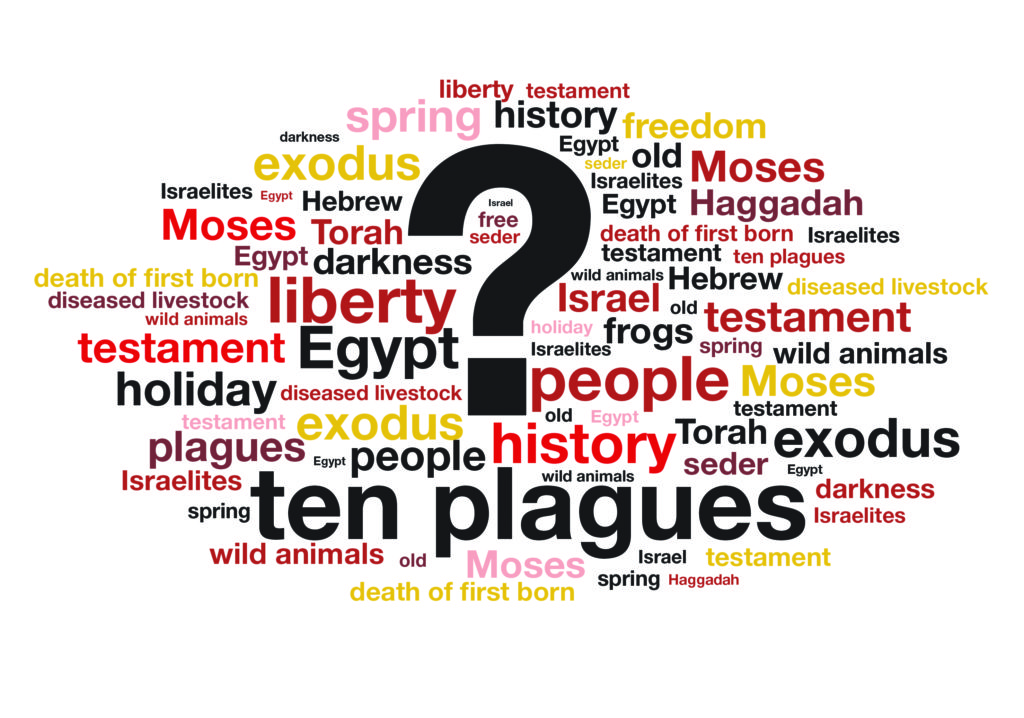 Passover is about questions. Yes, the children are supposed to ask them. (Why is that? See below.) But even adults who think they know everything about the holiday, which begins at sunset on Friday, probably have some questions if they gave it some thought. We certainly do. So we asked five questions, and here’s what we learned.

What was the point of the plagues?

Why all the drama? If God wanted the Israelites freed from Egypt, why not simply do it? Why, in other words, did the All-powerful spend time on frogs and lice?

It was a good teaching moment, says Rabbi Amy Schwartzman of Temple Rodef Shalom, a Reform synagogue in Falls Church.

Schwartzman says one interpretation is that the whole saga is meant to educate the Israelites, who at that point didn’t really know God.

“The Israelites needed to evolve in their understanding of God’s power in the world,” Schwartzman says. “They have no relationship yet with this God. They’ve been enslaved. So what’s going to build an understanding of who God is and what God’s powers and motivations are? If God just said, ‘You’re free now,’ it might not have had as much of an impact.”

Why would anyone invent a matzah sandwich?

The Haggadah talks about the great Rabbi Hillel, who celebrated Passover by combining the Passover offering, matzah and bitter herbs together in a sandwich. Millennia of seder goers have tried to follow Hillel’s lead, only to have the sandwich fall apart after one bite, the crumbling matzah leading the way.

It turns out, though, that matzah may not have always been so brittle, according to Rabbi Jacob J. Schacter, of Yeshiva University in New York.

Before it was mass-produced and packaged for Passover, matzah was hand made. The downside was that this matzah spoiled after a short time. The upside was that it was soft. Perfect for a Hillel sandwich.

“The Sephardi matzah is like a pita almost,” says Schacter. “They’re fluffier. That might be the more authentic version of what matzah should be, and the sandwich usage is much more intelligible that way.”

Why do we celebrate Passover the way we do?

“Actually it goes all the way back to the origins of Jewish history,” says Rabbi Daniel Nevins, of the Jewish Theological Seminary in New York. “Even as it’s happening in the Bible, the Bible is giving us a way to memorialize it. It’s like a tourist who gets to a beautiful site and takes out their camera first to memorialize before seeing it.”

The Passover rituals — specifically, the seder — set up the “master narrative” of Judaism, Nevins adds. And that has turned Passover into a core part of Jewish identity for many American Jews, according to Rabbi David Dunn Bauer, of the Reconstructionist Rabbinical College in Wyncote, Pa., who says even the least religious Jews are likely to celebrate Passover.

“It is part of the structure of American Jewish life and identity,” he says, adding that the tradition is about cohesion and deepening of the Jewish connection to its community.

Why does the youngest read the Four Questions?

The Four Questions are suited to children, he adds, because they’re not theological or philosophical questions so much as logistical ones about how the ritual is done.

What is the place of Passover in American Jewish life?

Religion in America has become very personalized, and Passover has the ability to emphasize the importance of affiliation, of community and of belonging, he says.

“The impact [of Passover] is enormous,” says Nevins. “It takes us from despair to celebration. Throughout history there have been many things that caused us despair. But Passover is a beacon of hope.”

Passover is setting the goal of final redemption, he adds. It makes you grateful for what you have, but gives you an aspiration of something even greater.