After making that delicious lemon potato salad a couple weeks ago, I wanted to try a sweet recipe with the lemon preserves. I decided on a lemon raspberry Bundt cake, because I love raspberries — and because it was one of the better-sounding options on the dessert list I found.

To be honest, I’ve never been a big fan of lemony desserts, but I was excited to try this one. When I was a kid, I turned all my cakes into Bundts, but I haven’t used one in at least a few years.

Baking has always been a stress reliever for me, and I love trying new things — then, if they’re good, reusing those recipes forever.

This recipe calls for the preserved lemon to be cored and pulped, then minced. From using the pulp in the potato salad, I knew it was useful and didn’t want to waste it. It just so happened I had already decided to make lox this week, so after ripping the pulp (actually, quite smoothly in segments) out of the preserved lemon, I set it aside to rub my salmon.

Aside from the preserved lemon peel, the ingredient that might surprise you most in this cake is the sour cream. It’s not as uncommon as one might think; I’ve seen plenty of cake recipes calling for sour cream, but I have never ventured one. It gives the cake a smooth and creamy texture, and keeps the thick batter together so it’s not a crumbly cake.

One tip the recipe suggests — and that I myself discovered months ago is crucial when making chocolate chip banana bread — is coating each raspberry in flour before putting it into the batter. This trick prevents your raspberries (or in other recipes, chocolate chips, blueberries, walnuts, etc.) from sinking to the bottom of the batter when baking. Trust me, you will want to take the time to do this.

This cake is delicious. It’s soft and dense, and the lemon flavor is strong but not overpowering. The raspberries complement the lemon nicely and the cake isn’t too sweet. The Bundt also gives the cake a nice outer layer of slight crunchiness. I dusted powdered sugar on top as suggested in the recipe, and my sister and I tasted it with some nice hot tea.

Considering that the preserved lemon has been sitting in its brine for about two months now, I was a little worried about the cake tasting salty. Also, the recipe calls for lemon juice as well as the preserved lemon, which seemed like it would be an overload of lemon.

But the little pieces of lemon peel give nice zings of flavor, and the cake itself has a citrusy feel without being overwhelming.

I brought in the cake to work today, and my colleague Samantha Cooper tried a piece. She also said she doesn’t usually like lemon, but enjoyed the cake. I myself had a piece for dessert after lunch.

This blog is part of a series documenting the progress of my lemon preserves, which I created at a Moishe House Northern Virginia event. 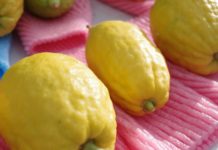