The Jewish Community Center of Northern Virginia offers numerous programs geared to the physical well-being of seniors, but one of the most recent programs caters to the mind.
The Adult Learning Institute, a program geared toward seniors that offers courses on a variety of topics, began its winter/spring semester Feb. 24 after launching last fall. Split into two sessions, classes for the semester run until May 20.

The center has always offered classes and discussions for seniors, but not in a bundle of different types of classes as the Adult Learning Institute does, says Carla Rosenfeld, the adult programming director for the JCC.

Rosenfeld, who arranges classes throughout the year, says the program is the brainchild, so to speak, of adult group coordinator Sheila Budoff, who felt the concept of an adult institute is the way many JCCs are going.

Unlike other programs, which require a big financial commitment or an annual fee, the institute is priced per class, and people can pick and choose what they want to attend.

“People are so thrilled we have something like this,” says Rosenfeld. “Our niche, which makes us different than other [learning programs in the area] is we have a mostly Jewish flair to things.”

A presentation by Allan Lichtman, history professor at American University and co-author of FDR and the Jews, kicked off the semester Feb. 24. Lichtman discussed his book, which revolves around whether President Franklin D. Roosevelt was indifferent to the plight of Jews in Europe during the Holocaust.

Other classes will cover Israel in the media, science and religion, German art history, protecting the environment and the short stories of Pulitzer Prize winner Bernard Malamud.
Rosenfeld says a subject many are excited to learn about for the spring semester is the focus on German art history, with two classes taught by George Mason University history professor Marion Deshmukh. In her first lecture, Deshmukh will discuss three major German Impressionist artists of Imperial Germany, and in her second lecture she’ll talk about the art of Hitler’s Third Reich.

Other guest speakers during the semester will include Washington bureau chief of the JTA Ron Kampeas, who will speak about what works and doesn’t work for reporters when advocating for Israel, and interfaith scholar and scientist John Rybicki, who will touch on cosmology, brain-mind consciousness and faith and reason. Dave Feldman, CEO of Livability Project and Rabbi Brett Isserow, spiritual leader of Beth El Hebrew Congregation will also speak.

“One class a session, we focus on a more religious type of program where we have rabbis or religious scholars teaching them,” says Rosenfeld.

Although classes are offered during the day and mostly seniors attend, Rosenfeld says they are open to people of all ages. “Most of them are during the day because we have a need for the people who are retired,” she says. “It’s certainly not exclusive.”

For the future, Rosenfeld says she hopes the classes are set up in a way that people can sit in on a class without having to physically attend, whether it be online or via broadcast, as some who would like to attend may be homebound or live far away. She would also like the program to explore new topics in the fall, which include music, hands-on art and Kabbalah.

For more information and a class schedule, go to jccnv.org. 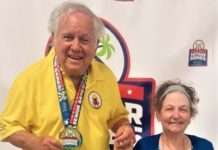