“Us and Them,” a 1973 release by rockers Pink Floyd, is also the name of band alumnus Roger Waters’ current concert tour, which stopped in Washington last weekend at the Verizon Center.

That divisive theme, reflected in Waters’ roiling support for the boycott, divestment and sanctions (BDS) movement, stirred up the Jewish Community Council of Greater Washington.

So last week, in advance of the concert, it created a music video of sorts to call on Waters to drop his support for BDS and use his music to unite.

“Music can change the world. Music breaks down walls,” the video’s narrator states as a rootsy guitar plays. “Roger Waters should know that. Instead he’s using music to divide people.”

The minute-long video was produced in a week for $10,000 by the Bluelight Strategies public relations firm, said Ron Halber, JCRC executive director.

“One can support BDS as a tactic and not be anti-Semitic,” Halber said. But Waters, whose stage show has included an inflatable pig emblazoned with a Jewish star and who in a Facebook interview compared Israel with Nazi Germany, had crossed the line into anti-Semitism, Halber said.

The goal of the video was to “condemn the anti-Semitic imagery of Waters and to show the Jewish community and beyond that about BDS’s nefarious intent of delegitimization of Israel,” he said.

He said the video makes its case in a “gentle, warm, nonconfrontational way.”

But some of its viewers were not feeling gentle.

“No,” the JCRC responded. “But please share the video with your friends so we can educate people.”

Rachel Vana wrote that she agreed with Kaserman. “We need to protest at his concert. To stand up against his action!” 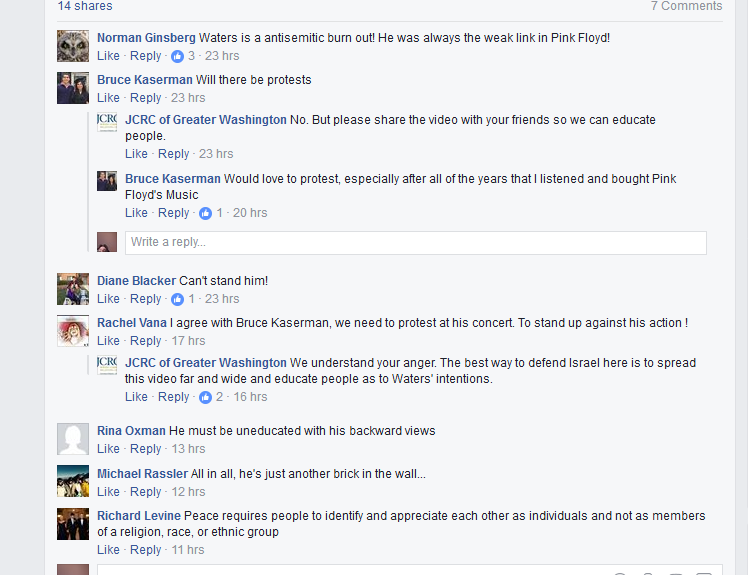 “We understand your anger,” the JCRC wrote. “The best way to defend Israel here is to spread this video far and wide and educate people as to Waters’ intentions.”

That wasn’t enough for Melanie Savage Kandel. “Let’s boycott his concert! He is a disgrace!” she wrote.

“We’re not going to encourage people to engage boycotts. We’re against that,” Halber said, adding, “We will not engage in any Pink Floyd album burnings.”