When Passover last year became the first Jewish holiday to take place since the World Health Organization declared the COVID-19 outbreak a global pandemic, Jews the world over struggled with novel questions about how to celebrate the holiday amid a dangerous viral surge.

This year, Passover arrives amid an accelerating vaccination drive that’s raising hopes and lifting restrictions around the world. But the pandemic is still not in the rearview mirror.

“On one hand, people want to keep traditions and the atmosphere of Pesach. On the other hand, we all know things can change at the last moment,” said Tamar Stampfer, who heads English-language content at Jerusalem’s Beit Avi Chai, which is creating an array of online content for the holiday. “The fact is, we don’t know yet what Pesach is going to look like this year.”

The initiative for Passover is part of a shift to original online programming that the cultural and educational hub has made during the last year of social distancing and lockdowns. While many of the programs have been anchored to the Jewish holidays, Beit Avi Chai also has created a robust lineup of year-round programming to engage Jews the world over on an ongoing basis.

The leadup to Passover will be particularly intense, with virtual lectures, cooking classes, musical performances and podcasts on offer. All the content is free, and much of it is available in English.

Rabbi Avraham Steinberg, director of the medical ethics unit at Jerusalem’s Shaare Zedek Medical Center, kicked things off in mid-March with a talk about Jewish ethics in the age of the coronavirus.

“Many ethical issues have come up with the pandemic, including triage when there’s a shortage of lifesaving measures, whether to vaccinate, obeying the experts and not doing things that may spread the illness, including celebrating various holidays when you’re in quarantine,” Steinberg said.

Passover, in particular, is fraught with pandemic-related questions.

“If you’re quarantined, how do you conduct a Seder? Can you be on Zoom with your family?” Steinberg said. “There are parts of the service that don’t require waiting for nightfall. Obviously at night, when it’s already a holiday, you cannot use this technology, so that makes it more difficult for some people.”

“With COVID-19 and everything that has happened, the most intuitive experiences of human culture — which for me are food and music —are now the most lacking,” said Offaim, who lives in a rural area of Israel not far from Jerusalem. “Restaurants and markets are closed, and there have been no live concerts. So I’ve invited some prominent musician friends to our farmhouse, and for 20 minutes we’ll be cooking together and playing music together. In that way viewers can feel they are with us.”

One of Offaim’s programs features Esther Rada, a singer of Ethiopian origin, with whom he discusses “the notion of freedom, exile and immigration.” On the menu is a shepherd’s pie “that does not involve hametz in any way, and not even matzot. It’s just basically meat and potatoes.” 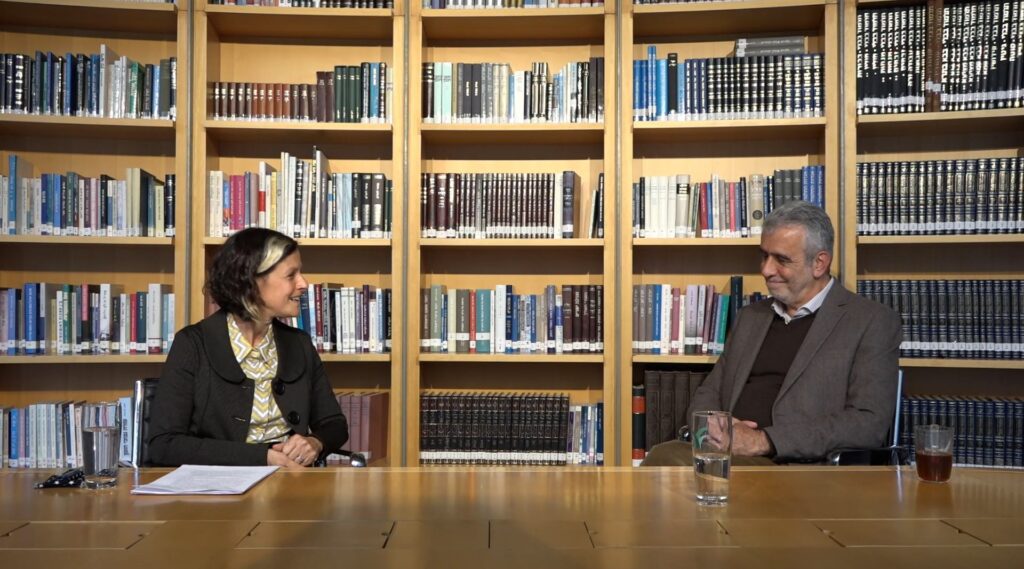 “Each episode includes the artists performing in our living room, cooking together in the kitchen and eating around the dining table, and usually telling a little Hasidic story on the front porch overlooking the farm,” Offaim said. “Cooking with musicians is my favorite thing to do, and this is my life.”

“It’s really about content, not geography. Over the last couple of months, our programs have opened up to a growing international English-speaking audience — not only in Israel, but also in America and Europe,” Rozenson said. “We try to make the programs as wide and diverse as possible while focusing on Jewish content and getting the full fabric of the Jewish people to participate.”

Dr. Chana Shacham-Rosby, a professor of Jewish history at Ben-Gurion University of the Negev, will present a talk the week before Passover how the Prophet Elijah came to be a central figure in the Seder.

“I looked at how the Jews living in medieval German-speaking Europe portrayed the character of Elijah and what they expected him to do at certain points in time,” she said. “The idea that Elijah visits the Seder table is introduced in the 15th century by the Ashkenazim. The Sephardim picked it up from the Ashkenazim later on, in the 18th and 19th centuries.”

Drawing on ancient Jewish sources as well as beautifully illustrated Haggadahs, Shacham-Rosby found that Passover traditions normally associated with Elijah — such as leaving the door open and pouring a fifth cup of wine on his behalf but not drinking it — emerged in the 1400s.

Beyond online classes and workshops, Beit Avi Chai is partnering with the Israel Museum to create a series of short films that bring Jewish holidays to light through the museum’s collection. Narrated by the Israeli journalist Romy Neumark, the series is being launched in advance of Passover. The films showcase collections of Haggadahs from around the world, artworks related to the Song of Songs, and biblical illustrations by Marc Chagall at the museum and at Israel’s parliament, the Knesset.

A series that brings an international flavor to Beit Avi Chai’s Passover programming is led by Shimon Iakerson, head of the Department of Semitic and Hebrew Studies at St. Petersburg University and the leading researcher at the Institute of Oriental Studies of the Russian Academy of Sciences and Museum of Ethnography. Iakerson’s sessions focus on rarely seen Judaica manuscripts housed in St. Petersburg and the first samples of Haggadahs found in the Cairo Geniza.

Beit Avi Chai’s online programs won’t end with Passover, even as the number of coronavirus cases continues to drop and life gradually returns to some semblance of normal.

“What will happen post-corona? How will audiences react when things start opening up? Will people continue to find comfort from their homes?” Rozenson asked. “I think it’s going to be a balance between the two. The older generation, which has learned how to use the internet, will continue to look forward to online study, while young people will want to be together with other young people.”

Among the post-Passover programming Beit Avi Chai has in store are several virtual tours: of Yad Vashem for Holocaust Memorial Day; the Israeli military cemetery on Mount Herzl in Jerusalem for Israel’s Memorial Day; and Jerusalem for Jerusalem Day. The educational center has also launched a new online archaeology series called “Eretz Hefer” in Hebrew with English subtitles.

The online programs for Memorial Day in Israel, or Yom Hazikaron, include a new series from Beit Avi Chai’s “A Face. The Day. A Memory” project that memorializes the lives of fallen Israeli soldiers and victims of terrorism through poignant animated films. All are accompanied by educational materials for use by educators and youth group leaders.

For those not able to join the programs live, they are all available for free on Beit Avi Chai’s website.

“Along with the challenges of the coronavirus era, we also found new opportunities,” Rozenson said. “Over this last year, we’ve embraced online learning in a way that allowed us to bring unprecedented dynamism to the online sphere and reach new audiences all over the world.

“Even when Beit Avi Chai resumes in-person events, we’ll continue to expand our original online offerings so that people can access our learning wherever they may be.”

This article was sponsored by and produced in partnership with Beit Avi Chai, a center for the creation, development, and expression of Jewish and Israeli culture and education aimed at the full spectrum of the Jewish people in Israel and around the world. This article was produced by JTA’s native content team.