With a tagline of “Think Forward,” this year’s General Assembly of the Jewish Federations of North America focused on new strategies — financial and otherwise — to face the dual challenges of declining affiliations and bottom lines.

In an introspective moment, Leslie Wexner, chairman and CEO of L Brands, speaking about cultivating Jewish leadership, summed up the feelings of many of the federation professionals present.

“We have a self-imposed diaspora,” Wexner told the 3,000 attendees at Monday morning’s plenary session at the Washington Hilton Hotel. “We’re not talking to each other. We’re not communicating effectively.”

That introspection ran through the plenary and breakout sessions.

Dan Pallotta, founder and president of the Charity Defense Council, turned the fundraising conversation on its head, when he asked the audience, “What if everything we’ve been taught about charity and giving is wrong?”

Billed as a philanthropic pioneer, Pallotta gave a TED-style talk that served as a challenge to the Jewish community to rethink how it thinks of charitable giving.

The question so many donors ask — “What percentage of my donation goes to the cause versus the overhead?” — is inherently problematic, said Pallotta. Overhead should be thought of as part of the cause, not as a negative. In fact, overhead is necessary for organizations to really grow. In other words, “we should be investing more money, not less, in fundraising because fundraising is the one thing that has the potential to multiply the amount of money available” for causes Jewish federations care about, he said.

Pallotta spelled it out using an example from his background with Breast Cancer 3-Days. The initial investment was $350,000 of risk capital. In five years, he said, that mushroomed into $194 million, after expenses, for breast cancer research.

“Now, if you were a philanthropist really interested in breast cancer, what would make more sense — go out and find the most innovative researcher in the world and give her $350,000 for research or give her fundraising department $350,000 to multiply it into $194 million for breast cancer research?”

By the sound of the thunderous applause, the G.A. audience agreed with his assessment. Fundraising, a recurrent theme at G.A. meetings, was the topic of conversation in a number of breakout sessions.
In one session dedicated to defining the role of community organizations, federation professionals and lay leaders voiced the challenges they face at home. Educating the Jewish population about what federations do, branding and competing against fellow Jewish agencies for the same pool of donor dollars — and keeping major donors happy — were concerns for many.

The sentiment expressed was that the “genie is out of the bottle” when it comes to convincing agencies to forgo their own fundraising in favor of having communal funds disbursed to them, explained one federation campaign chair. Another community professional, whose small federation adheres to the traditional model of fundraising, said that while its recognition in the community was strong, the reliance on a handful of donors gave those unnamed donors outsized power over programming and, in some cases, hiring and firing.

Gerrald Silverman, JFNA president and CEO, took time Monday morning to meet with a large contingent of University of Maryland Hillel students, staff and alumni. As opposed to the thousands of students who have been invited to general assemblies in the past, Silverman said, this year the G.A. intentionally limited the number of students to approximately 250.

Those Maryland students present peppered the CEO with questions. What, one student asked, is the biggest challenge facing the American Jewish community? In a sneak preview of his address later during the three-day conference, Silverman said it’s the population replenishment rate. Intermarriage and drop-out rates aside, he said, non-Orthodox Jews, who make up 90 percent of American Jewry, have a replenishment rate of 1.7 instead of the necessary 2.1 to keep populations stable.

Ariel Lanes, co-president of UMD’s chapter of J Street U, the campus branch of the self-described pro-Israel pro-peace lobbying group, queried Silverman about transparency regarding individual federations’ decisions to come out against the Iran nuclear agreement, a decision that she said made progressive Jewish voices feel alienated from the community. The Jewish Federation of Greater Washington did not take a position on the nuclear agreement.

Silverman responded that JFNA as an organization decided early on that rather than take a stance, it would try to serve as a conduit for education, sponsoring multiple webcasts with key players in the deal, including a webcast with President Barack Obama. Individual federations, said Silverman, serve different communities. He pointed to Chicago, which came out against the deal, as an example of a federation where conversations took place with great transparency. Silverman said that even those who supported the deal — and, he reminded the students, there were plenty of people in the Chicago federation who had personal ties to the president — felt that their views were acknowledged.

In an interview, Weinberg, a former president of the Jewish Federation of Greater Washington, spoke about three highlights of her term.

“We put the spotlight back on campaign,” she said. “We focused on bringing top-level professionals to the national organization. And we repurposed the G.A. — back to being the resource for federations.”
Feinberg began her involvement in federation work during high school.

After her term as the organization’s president, she moved on to work on the national and international levels.

“Who I am today comes from the foundation that started in Washington,” she said. “You can’t be in the [local] limelight forever. But that doesn’t mean you lose your passion and your commitment.”

Her next job in the federation world is “working with past presidents to keep them active,” she said.
It’s a path more than one Washington Federation president has taken.

Said Feinberg, “How many organizations are there where leaders finish locally and go on to become leaders nationally?” 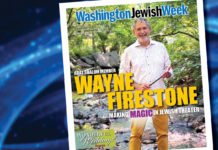