Jewish Federations throughout North America are stepping up their involvement in Israel – establishing initiatives to end childhood poverty, promote civil marriage and enable young adults to immerse themselves in Jewish-oriented service throughout the world.

Jewish Federations of North America’s Global Planning Table, which was established in 2011, unanimously adopted two signature initiatives and one voluntary project this month in an effort to attract new donors, increase fundraising and engage more Americans in Israel and Jewish life.

Choosing what to focus on took about nine months, beginning with a list of 17 options, noted Jerry Silverman, JFNA president and CEO. One initiative, JQuest, is designed to establish life-long bonds with Judaism and Israel by enabling young adults to embark on internships, working and studying all over the world in various Jewish communities.

The second signature initiative, The Israel Children’s Zone, has the goal of breaking the cycle of poverty for children and their families in some of the poorest Israeli neighborhoods.

The volunteer program, iREP Israel Religious Expression Platform, is expected to challenge some Federations, including the Jewish Federation of Greater Washington, to strengthen support for Jewish diversity and religious expression in Israel. Areas of focus include civil marriage, conversion and other life-cycle events for those in Israel who are not Orthodox. Because some Federations may not want to step into the controversy, this program is voluntary.

Surrounding all three programs is the idea that donors have the opportunity to shape the conversation, create dialogue and create ideas, Silverman said. At the same time, he said, JFNA is hopeful the new programs “will bring in incremental dollars over and above what Federations are raising.”

Steve Rakitt, executive vice president and CEO of the Jewish Federation of Greater Washington, is anxious to bring these new programs to his board “for consideration and participation,” adding that “all these initiatives can engage our community and Israel.”

He anticipates that the local Federation will opt into the voluntary iREP and “be a proud participant,” as members in this area already have spoken out in favor of civil marriage and greater Jewish diversity in Israel.

“D.C. is a community for whom this issue resonates,” Rakitt said.

Rakitt is also excited about the emphasis on involvement by young adults. “There are dozens and dozens of opportunities for young Jewish adults,” but he expects JQuest to be “a game changer in their lives,” as it is not a stand-alone program that involves one trip to Israel and lasts a few weeks or months, he said. He envisions it one day becoming “almost a rite of passage for young Jewish adults.”

Silverman explained that JQuest is about “truly engaging younger adult populations in new and exciting and inspiring ways with other Jews worldwide through service.” They will be helping their fellow Jews, learning about their lives and forming attachments both with their fellow participants and the community in which they are involved.

The program is geared for those between 18 and 34 years and will help them not only strengthen their Jewish ties but also build up their resumes.

The other initiative, The Israel Children’s Zone, is designed as a comprehensive approach to dealing with children at risk and concerns involvement in many areas, including education, family stability and community support. The program will work with children from birth through college and into the job market, Silverman explained. It will involve the entire family and community, he added.

The initial target area is expected to be Kiryat Gat in the Northern Negev, where nearly 50 percent of the children are considered at risk, according to the Federation. More than one-fourth of Israel’s Jewish children live below the poverty line, according to JFNA.

As more and more Federations begin initiating in these programs, JFNA continually will be checking on their success, Silverman said. His organization will be checking to see what works and what doesn’t and will continue to partner with the Joint Distribution Committee and the Jewish Agency for Israel on these matters. 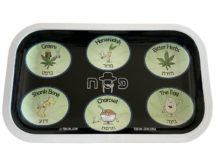 Jewish thinkers split among ethics of cannabis use