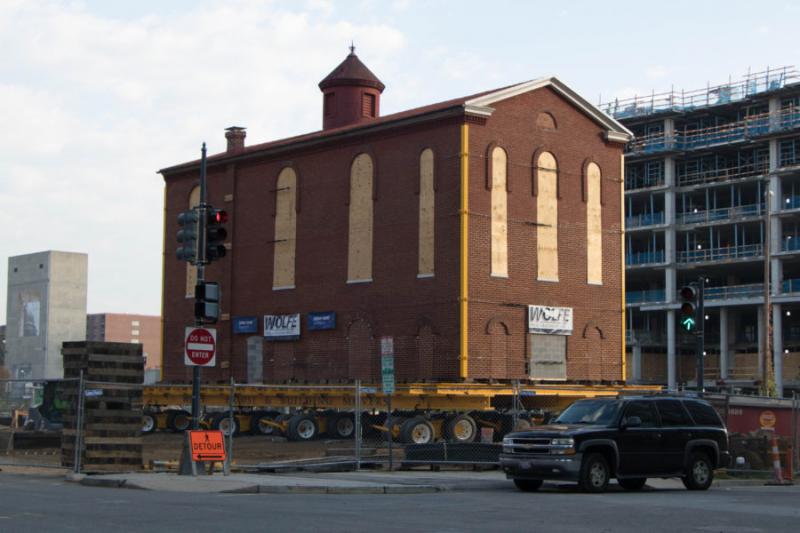 The 140-year-old former synagogue that houses the Lillian and Albert Small Jewish Museum was moved off its foundation Nov. 3, the first step in its eventual removal to three blocks from its current site at 3rd and G Streets in downtown Washington.

About 250 people gathered for a reception and to watch workers raise the building onto a set of wooden cribs attached to wheels and move it 40 feet. The historic building will complete the journey to its new location when the site is ready in about two years, said Wendy Turman, deputy director of the museum.

“The building had to move and we wanted to have a public celebration to watch it move on its next step in its journey,” she said.

The building will continue to rest on the wooden planks once the wheels are removed. The building will be closed to the public, although walking tours and programs will still begin outside it.

The move is the building’s second. It was moved in 1969 to accommodate the construction of the Metro. During last week’s event, Adas Israel Congregation Rabbi Gil Steinlauf was quick to note that the building housed the original Adas Israel and drew a comparison between the synagogue’s journey that began in 1876, and that of the Jewish people.

“Our story here echoes all the stories of the ancestors of our generation,” he said. “We came here bringing our Torah and our traditions and our families to find opportunity and a better life. This opportunity represents an extraordinary relationship between the D.C. Jewish community and the leadership of this great nation,” he said.

Rabbi Arnold Resnicoff, a Navy chaplain, said, “We always use the phrase ‘wandering Jew,’ so I think this synagogue is going to become symbolic in a large sense. It’s a wandering synagogue.”

Bernard Glassman, a past president of the society who was involved in saving the building from being demolished 47 years ago, had thought he had a conflict with the day’s event. He said he would not have missed “the most important single event in my 95-plus years” for anything.

“I was prepared, if necessary, to give up a funeral for an old friend of mine of 90 years,” he said. “Does that tell you how important this event is?”