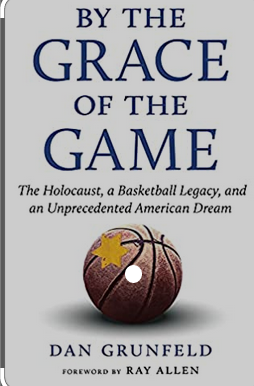 “By the Grace of the Game: The Holocaust, a Basketball Legacy and an Unprecedented American Dream” by Dan Grunfeld. Chicago: Triumph Books, 2021. 288 pages. $28.

If you’re a Wizards/Bullets fan, Ernie Grunfeld needs no introduction. To the non-cognoscenti, Grunfeld was the Washington NBA team’s president of basketball operations from 2003 to 2019. Before that, he was an All-American basketball player in college, a member of the gold-medal-winning 1976 U.S. Olympic basketball team, an NBA player for the Milwaukee Bucks, Kansas City Kings and New York Knicks and an NBA executive.

But 12 years before playing for the American Olympic team, Grunfeld and his family had arrived in New York from Transylvania in Romania. The native Hungarian speaker knew no English.

And Grunfeld’s mother and father — the author, Dan Grunfeld, Grunfeld’s son, calls his grandmother and grandfather Anyu and Apu — were Holocaust survivors. (Ernie may have been the only player in American professional sports, the NBA, NFL, MLB and NHL, whose parents were survivors, Dan surmises.)

This is the loving account of three generations of the family, told with passion and wisdom.

Anyu’s father, an Orthodox Jew, had been a wealthy landowner who employed workers to raise cows, turkeys, ducks, chickens, geese, sheep and horses. Cherries, raspberries and various vegetables were also grown on his land.

Everything changed after the Nazi invasion. In the Budapest ghetto, where she ended up, Anyu became a nurse. “She had no medicine or training. The patients had no beds and were laid out on the floor. Anyu tried to do her best.”

She found her brother and a sister in the ghetto. They were freed in January 1945 as the Nazis left Budapest.

The two sisters returned home to discover that the Nazis had murdered their parents and most of their siblings. Either the Nazis or their neighbors had looted all their possessions.

Dan’s grandfather, “Apu,” was an outstanding ping pong and soccer player, who worked in a slave labor camp during the war. The Nazis had murdered his parents, stepparent and two sisters.

After returning from the camp, he opened a shoe store, but lost the store when the Communists came to power. The state gave him the job of selling fruit and vegetables wholesale and then selling damaged and distressed goods.

Escaping the double whammy of Nazism and Communism, they received permission to leave for Israel but, instead, the family immigrated to America.

Having suffered through the death of their older son from leukemia, the Grunfelds worked in unskilled jobs, saving most of their earnings until they were able to open a fabric store in the Bronx.

Meanwhile, Ernie was busy learning English and being acculturated into American society. One of the main places where he learned about his new country and became an American was at the local basketball courts.

During the week, he was a latchkey kid, as his parents worked from 8 a.m. to 8 p.m. in their store. Ernie began to play basketball, a game he had never played in Romania where soccer was king, at the nearby Austin Street Playground.

He was a big kid, his son reports, athletic with huge hands. From an early age, he began to develop into a good player.

After starting at the University of Tennessee, Grunfeld had an unremarkable eight-year NBA career, eventually becoming an executive in the league for New York, Milwaukee and Washington.

The most interesting part of the book deals with Dan Grunfeld, showing how he gained — and suffered — from being the son of a famous father.

Ernie Grunfeld was the Knicks’ general manager in the early 1990s.

“In those days, being GM made you a king in New York. I benefitted from this stature though I hadn’t earned any of it,” writes Dan about his childhood. “I was a typical prince born into good fortune.”

He got seats on the dugout for Yankee World Series games, went to Saturday Night Live premiers, was the only skater at Rockefeller Center during a Knicks holiday party held at that venue.

As he grew older, this unearned privilege made him feel uncomfortable and even guilty. As a child, he bonded with his father over their love for basketball, and naturally he wanted to follow in his dad’s professional footsteps.

Playing at Stanford University, he began to show promise of an NBA career until a catastrophic knee injury suffered during a game ended any realistic hope for playing in the NBA.

But he rehabbed his knee and created a career in European basketball, playing for teams in Germany, Spain, Romania and Israel.

And he learned to tame his obsession with the game. “I started to see basketball as representing what mattered most to me instead of being what mattered most to me,” he writes. “Success and failure in basketball were temporary. Family and values were forever. The game had always been my vehicle to carry a legacy, but I was learning that there were other ways to carve a meaningful path. Growing apart from basketball basically just meant I was growing up.”

Dan’s relationship with Anyu — and especially with her food — is an integral part of the book. He eloquently praises her culinary skills, making her the number one Jewish grandmother cook in the world, tied with my grandmother and that of every other Jew.

In addition to causing him to overeat to the point of distress, Anyu had taught him an important lesson — that it is important “to take pride in your goodness.”

I loved this book, but it’s hard for me to say if that’s because of the subject matter — it couldn’t get much better for me than Jews and the NBA — which appeals to me so much, or the artistry of the author.

With that caveat, this book is highly recommended.