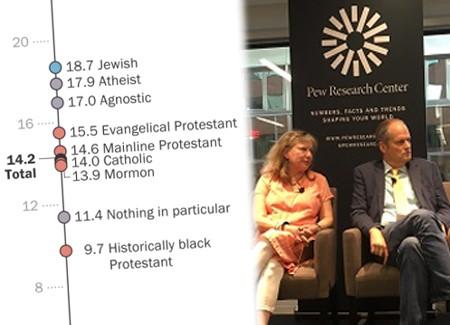 When it comes to world religions, Jews are the most knowledgeable religious group in America, according to a Pew Research survey. Jewish respondents, on average, correctly responded to 18.7 questions on a 32-question multiple-choice survey, which tested knowledge of the Bible, Christianity, Hinduism and Islam.

The data collected from nearly 11,000 Americans in February revealed that most Americans, don’t know much about religion. Jewish respondents knew the most about both Christianity and world religions. The average respondent could only answer 14.2 questions correctly. After Jews, the highest-scoring groups were atheists, agnostics and evangelical Protestants.

The survey, “What Americans Know About Religion and Why It Matters,” published on July 23,
revealed that most people knew very little about Judaism.

“I’d say they [the respondents] flunked,” Stephen Prothero, the C. Allyn and Elizabeth V. Russel Professor of Religion at Boston University said during a panel hosted by Pew to discuss the findings on July 24.

“I’m surprised people did as well as they did,” said Diane Winston, the Knight Chair in Media and Religion at USC Annenberg.

Despite the lack of knowledge around Judaism, most people (63 percent) responded that they felt “warmly” or positively toward Jews, according to the survey. The respondents who knew Jews tended to rate the group more positively.

The more a respondent knew about religion, the more likely they were to rate the religion’s adherents positively. The only exception were evangelical Christians, who were rated lower the more people knew about them.

Most of the respondents knew more about Islam than Judaism, with about 60 percent of those surveyed answering “What is the holiest city in Islam?” (Mecca) and “What is Ramadan? (an Islamic holy month) correctly.

Yet, people perceived Muslims less warmly than Jews. The panelists said this is likely because there is more coverage of Muslims in the news, but most people don’t know any Muslims personally.
The panelists believed that Jews scored the highest as they tended to be among the highest-educated religious group, which often meant they took a world religion course and tended to have the most friends of different religions.

Most of the questions on the survey focused on Christianity. The creators “wanted to give people the chance to show what they know about their faith,” Becka Alper, a Pew research associate, said during the presentation.

Then there were four questions about Judaism, three about religious composition, two each about Islam and Hinduism and one each about Buddhism and Sikhism. One question asked for the definition of atheism.

Alper said Pew also aimed for “spectrum of difficulties” among the questions: from “Which is not one of the Ten Commandments?” (Do unto others as you would have them do unto you) to “Which text is most closely associated with Hinduism?” (Vedas).

The survey was unable to calculate how Muslims and Hindus fared on the test; there wasn’t enough data from either group to make any conclusions. Fewer than 1 percent of the participants earned a perfect score.