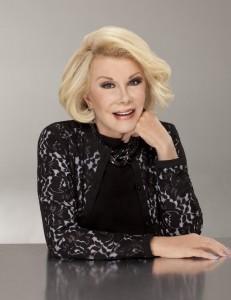 Legendary Jewish comedienne Joan Rivers has died at 81. The pioneering queen of comedy passed away Thursday after she suffered cardiac arrest while undergoing a routine throat surgery, her daughter Melissa said in a statement. Rivers was admitted to New York’s Mt. Sinai hospital Aug. 28 after she stopped breathing, and had been placed in a medically-induced coma.

“She passed peacefully at 1:17pm surrounded by family and close friends,” Melissa said in a statement. “My mother’s greatest joy in life was to make people laugh. Although that is difficult to do right now, I know her final wish would be that we return to laughing soon.”

Known for never holding back when it came to providing her unfiltered opinions on everything from what Kim Kardashian was wearing on the red carpet at the MTV Video Music Awards to the Israeli-Palestinian conflict, the standup comedienne, known for her catchphrase “Can we talk?,” was renowned for her fearlessness, tenacity and courageousness to say whatever was on her mind.

Rivers began her career as a standup comic in Greenwich Village in the 1960s, a time when the words ‘female’ and ‘comedy’ almost never went hand in hand. Rivers’ performances landed amounted to her first appearance on national television, which was a guest spot on Johnny Carson’s The Tonight Show, a gig she said was responsible for launching her professional career.

In more than five decades, Rivers hosted two syndicated talk shows, recorded comedy albums, appeared in numerous films, TV shows and standup specials, had her own jewelry line on the Home Shopping Channel and was the author of 12 best-selling non-fiction humor, memoirs and self-help books. Recently, she was best known for hosting Fashion Police on E!, a weekly program that launched in 2010, in which she, Giuliana Rancic, Kelly Osbourne, George Kotsiopoulos and a number of celebrity guests commented on the best and worst looks donned by Hollywood celebrities. Rivers also shared a reality TV series with her daughter called Joan & Melissa: Joan Knows Best? (2011-2014) and launched a YouTube series in 2013, In Bed With Joan, where she interviewed celebrities and comedians, including her first guest, fellow Jewish funny girl Sarah Silverman.

Rivers’ last visit to D.C. was in July, when she came to Sixth & I to discuss her latest book, Diary of a Mad Diva, with journalist Hanna Rosin. Washington Jewish Week reported on the event, noting that Rivers gave every ticket holder a copy of the book with an autographed nameplate, as she said it was “too cheesy” to ask people to buy it. During the talk, Rivers provided her thoughts on Heidi Klum, Helen Keller, the Kardashians, and her fondness for telling Jewish jokes.

Her opening joke was about Heidi Klum and the Holocaust: “I haven’t seen anything that hot since the Germans were pushing Jews into the ovens,” she said. “I’ll get [it] from the ADL for insulting the Jews, but if I had said the gypsies, the Jews would have complained they were left out.”

And her thoughts on Anne Frank? “I’m nothing like Anne Frank. She lived in a walk up; I live in a penthouse. She stayed home all the time; I go out shopping.”

Rivers said she performed a lot of Jewish jokes “to remind people about who we are and that we’re still here … and to shake things up.” She went on to talk about the difficulties of becoming a successful comedienne as a young woman, and how she remained grateful to Johnny Carson.

“I have never found being a woman in this age to be a hindrance,” she said. “Back then I couldn’t do an abortion joke. … I couldn’t even say I was pregnant on the air to Ed Sullivan. I had to say soon I will be hearing the pitter-patter of little feet.” She also told the audience that she never thought she ever went “too far” with a joke. “Every time I can make someone laugh, it’s like giving them a small vacation,” she said.

Rivers’ next appearance in the Greater Washington area was scheduled for Nov. 7 at Strathmore in North Bethesda.

Check out Rivers’ recent return to The Tonight Show below.