As Washingtonians step off the escalator and into the sunlight at the Dupont Circle Metro, Jordan Grossman is waiting for them. He has a stack of handbills showing his smiling face and the slogan “For You, Not For Sale.”

Grossman’s slogan is a direct dig at Jack Evans, D.C. Council member for Ward 2 since 1991, who is facing increasing criticism for using his positions of power for personal gain. In June, he resigned as principal director of the Metro Board of Directors after being found to have violated its ethics code.

Grossman, 33, is one of six challengers to Evans in next year’s Democratic primary. In largely Democratic Washington, a primary win all but guarantees victory in the general election. Other candidates include John Fanning, Daniel Hernandez, Patrick Kennedy, Kishan Putta and Yilin Zhang.

Groups like Sack Jack and Ward 2 Citizens Recall have been collecting signatures and trying to mobilize voters against Evans.

“What he’s focused on is his own financial interest,” Grossman says. “He is not focused on the issues that matter to people in Ward 2.”

Though Evans is under federal investigation, he has not recused himself from voting on matters that involve him.

“I think shameless corruption is reason enough” to step down, Grossman says of Evans.

Grossman adds that he wants to restore the public’s trust in government by creating anti-corruption laws and enforcing laws on the books.

“My Jewish background is what motivates me in public service,” Grossman says. “It’s driven me my whole life.”

Through his public service, Grossman says he is working to repair the world. He was a field organizer for the Obama campaign in 2008, a deputy legislative director for Sen. Amy Klobuchar (D-Minn.) and he clerked for a judge on a Washington federal court.

Most recently, Grossman was the director of the organizational change management division at the Department of Health Care Finance in Washington.

He grew up attending Washington Hebrew Congregation, and now attends Adas Israel Congregation with his wife.

Being a fifth-generation Washington resident is one of Grossman’s key selling points on the
hustings. Ward 2 embraces central Washington, including Sheridan-Kalorama, Logan Circle
and Shaw.

Grossman’s great-great-grandfather owned a kosher butchery in Georgetown. His grandfather ran Standard Tire and Battery on H Street and his mother went to school in Ward 2.

“D.C. has made it possible for my family of Jewish immigrants to achieve the American dream,” says Grossman. He wants to make it easier for other residents to feel that they can stay in the rapidly gentrifying ward and thrive there. “I really want there to be a sixth and seventh generation,” he adds.

He hopes to do this is by creating more affordable housing options, providing high-quality childcare, creating a plan to help people pay off student loan debt and focusing on transit and pedestrian safety.

Grossman’s campaign has been largely a ground-level effort, with casual stops at each Metro station in Ward 2, and meet and greets at farmers markets, grocery stores and other neighborhood spots.

“We think if we can meet person by person, we can build a movement to [get rid of] Jack Evans,” Grossman says.

Several people getting off the escalator at Dupont Circle recognize Grossman from his previous meet and greets. One woman says she met him at an event for the progressive Jews United for Justice and stops to chat.

But one Ward 2 voter Grossman speaks to says he is supporting Jon Fanning, who represents Ward 2 on the D.C. Democratic State Committee.

“I believe he’s the man of the people, he’s not a Democratic Party operative,” Adrian Salsgiver says of Fanning, and adds that Evans will win the race unless the LGBTQ community rallies behind a single candidate.

At a meet and greet that evening, Grossman chats comfortably with friends of friends who are here to get to know him. He’s also trying to reach people who are not already deeply entrenched in local politics.

On affordable housing, Grossman mentions that Washington has the highest numbers of homelessness out of 32 major cities in the United States.

“They’re just as much residents as anyone else,” he says. As a council member, he says he would prioritize investment in programs like the Local Rent Supplement Program and the Housing Production Trust Fund.

Jeff Hauser, whose kindergartener attends Thomson Elementary School in Ward 2, is worried about charter schools getting “more than their equal share” of funding.

“I believe Jordan recognizes that the system in D.C. has skewed toward charters and needs balancing,” says Hauser, who wants to hold the government to a high standard of transparency.

Some attendees volunteer to host small meet and greets for Grossman’s campaign, and Feder tells people, “Jordan’s about as far from Jack Evans as you can get.”

Asked about rent control, Grossman said he would support it because it has been “really important for people, especially in the short term,” but that he would want to strengthen and expand on it.

Oversight and implementation are likewise important. “D.C. has some of the strongest housing protections on the books,” he says, but they aren’t enforced. For example, it is illegal in Washington for landlords to discriminate against people who would use vouchers to pay rent.

“But we literally have [landlords] advertise in writing that they’re going to do that,” Grossman adds.

He’s also a big proponent of D.C. statehood, and says that although advocating for that isn’t exactly in the council’s wheelhouse, he thinks the council should have a real transition plan for when it happens.

“I know there’s a lot going on. There’s things, federal, all this other stuff. So I just want to say thank you [for coming],” Grossman says to attendees. “It’s very inspiring to me … people want to listen to people and participate in their community.” 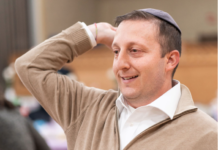 A Call to Care at Summer Camp