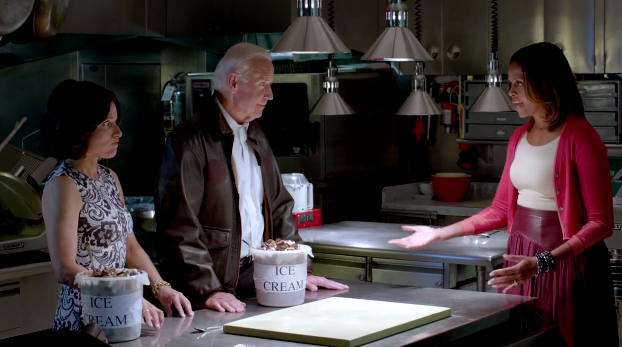 What happens when a fictional Vice President and the real one team up? White House Correspondents’ Dinner attendees and the rest of the world found out just prior to Obama taking the stage on Saturday’s event, with a seven-minute short (now on YouTube) starring Louis-Dreyfus in character as Veep’s Selina Meyer, and none other than Joe Biden himself.

In the video, Louis-Dreyfus and Biden taken on D.C. in his yellow Corvette, making their way to the White House kitchen to sneak ice cream, only to be caught in the act by first lady Michelle Obama. They then concocted fake news headlines for the Washington Post (including “Biden Real Brains of Operation, Obama discloses,” before bumping into Nancy Pelosi at a tattoo parlor. The video also revealed that House Speaker John Boehner spends his free time watching videos of pandas eating bamboo.

Check out the video below