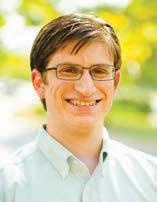 Justin Katz is a multimedia journalist whose passion for reporting started in high school. He moved to Maryland and started writing for the Washington Jewish Week’s sister paper, the Baltimore Jewish Times, nine days after graduating from Flagler College in St. Augustine, Florida.

As a student journalist at Flagler College, Katz was recognized by the Society of Professional Journalism in the Mark of Excellence awards and the Sunshine State awards for his work in the Flagler College Gargoyle. He also produced, shot and edited videos for Ancient City Stories, a television show about the people, places and history of St. Augustine, Florida. His videos were aired on the CW-17, which broadcasts to 600,000 homes in northern Florida and southern Georgia, as well as the 2015 St. Augustine Film Festival. Katz was inducted into the Phi Omicron Chapter of the national communication honor society, Lambda Pi Eta, in April 2014.

As a native of Long Island, New York, his favorite place to grab a bite to eat in Manhattan is Katz’s Deli. (Unfortunately, no relation.)