It was the worst of books. It was the best of books. My apologies to Charles Dickens, but the great novelist’s words best sum up my feelings about “Lost & Found.”

Part of this memoir focuses on the meanings of various concepts — lost, found and grief. I found it to be both uninviting and overwhelming.

There’s too much here. Every page — no, every paragraph —is chock full of theories and concepts. I enjoy books that stretch the mind, but Kathryn Schulz went too far here.

But when Schulz turns to love, she is amazingly perceptive and her prose at times is beautiful. The book became a joy to read.

After her father had died — her father’s death and its impact on her is the book’s main theme — she remembers “watching my mother cradle the top of his bald head in her hand. A wife holding her dead husband without trepidation, without denial, without any possibility of being cared for in return, just for the chance to be tender toward him one last time: it was the purest act of love I’d ever seen.” 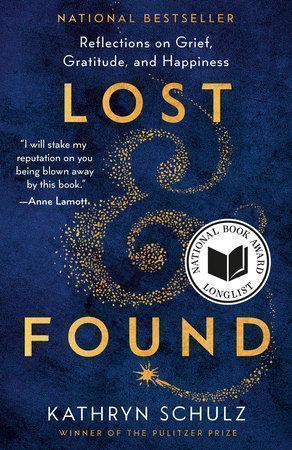 Her descriptions of meeting and falling in love with “C” — the woman she eventually marries — are more than worth the price of the book.

On their second date, they have dinner at the author’s house and then go for a walk. “Afterward, I led her back indoors. For a long time after that, everything that wasn’t her — the house around us, the rest of the world, the passage of time, the past and the future — retreated into unimportance.

“The next morning, we woke up shy and happy and amazed, in ways both large and small.”

Love is mysterious and can happen very quickly, she writes. “Regardless of the exact duration of a fleeting exposure — a first glance, a first interaction, a first conversation, a first date — we can sometimes recognize, incredibly quickly, that we have found our beloved.”

She is Jewish and her lover is not.

She became bat mitzvah, lights candles on Jewish holidays and is moved by Kol Nidre and Jewish songs.

But, Schulz writes, she “never found satisfaction or solace” from the answers religion presents about the important questions of life —good and evil, the origins of the universe and life, how to treat each other, etc. And she does not believe in God.

C not only does, but for a time considered becoming a clergywoman and goes to church.

These differences, she writes, “have never caused either of us any real friction or fear.”

In general, differences are a good thing when it comes to love and lovers, she concludes. The reason you love the other person, she writes, “is that she is like no one else on earth. That includes you: your beloved is not like you.” In sum, she continues, “the trajectory of a happy relationship, which begins with cherishing similarity, ends in cherishing difference.”

In addition to love, the author delights in nature and writes about it delightfully.
In late September, she and C are walking beside a flower bed they had planted near their home on Maryland’s Eastern Shore. The flowers have started to go to seed but they still are “a late, bright riot of cosmos; the last of the dusky blue cornflowers; fat, pollen-packed fingers of goldenrod; a smattering of bright pink zinnias, each one as round and closely petaled as an old-fashioned lady’s swim cap.”

At the end of the book, Schulz writes about humanity and death. For a long time, I’ve believed that the nobility of humans stems from our ability to carry on, to live our lives as best we can, despite understanding our fate, the inevitability of death.

On that question, I believe that she and I are as one.