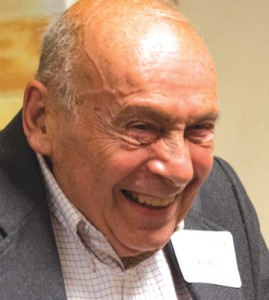 Lee C. White, 90, of Washington, D.C., passed away on Oct. 31 at Suburban Hospital in Bethesda. White is survived by his children Bruce, Rosalyn, Murray, Sheldon and Laura White, and his sister Shirley Levy.

White was a lawyer and a civil rights adviser who helped the Kennedy and Johnson administrations in the 1960s.

Many people may have not known that White was President Lyndon Johnson’s closest civil rights adviser, as his son Murray noted in a 2008 column in the Washington Jewish Week.

While promoting White’s then recently published memoir Government for the People: Reflections of a White House Counsel to Presidents Kennedy and Johnson, Murray wrote, “One reason they don’t know it is because he doesn’t have the kind of ego that’s obsessed with getting attention. Both when he was in the White House as LBJ’s special counsel and after he had left it, he was disinclined to toot his own horn about the key role that he played in helping our nation take the huge legislative step toward healing the biggest wound it has ever had. It’s a perfect example of modesty and tikkun olam occurring simultaneously.”

In his memoir, White wrote that his most important role in advocating civil rights was helping push the anti-discriminatory Voting Rights Act of 1965 through Congress. The White House finalized legislation on March 7, 1965, which led to “Bloody Sunday,” where state troopers in Selma, Ala., attacked peaceful civil rights demonstrators. The event was broadcast on national television and was met with widespread repugnance.

White left the White House in 1966 and served as chairman of the Federal Power Commission (now Federal Energy Regulatory Commission) for three years. He then became the top advocate on energy policy for the Consumer Federation of America’s in 1973.
According to The Washington Post, he spent the rest of his career specializing in regulatory law affecting utilities in private practice, and he was of counsel to Spiegel & McDiarmid in Washington when he died.

During the funeral, which was held on Nov. 3 at Judean Memorial Gardens in Olney, Murray wrote of his father in a statement:

“One of his finest traits was loyalty. An incident from my early twenties illustrates the point. I was driving home from the Midwest and experienced car trouble about a hundred miles west of Washington. It was around eleven o’clock at night on a weeknight, and I had to leave my car at a service station. I called him up and asked if it would be possible for him to come and get me. He did. And he never once grouched about it. There are so many stories like that — stories that illuminate his inner character. We don’t have time to tell all of them now. But in the days and years ahead, we will be able to savor them and share them with each other in the course of endless hours of conversation.”

The funeral was conducted by Rabbi A. Nathan Abramowitz, a longtime friend of White’s who also conducted the funeral of his first wife Dorothy Cohn, the mother of Murray and his four siblings.

Memorial contributions in Lee White’s name may be made to the charity of your choice.