Joan Rivers: She Can Tawk 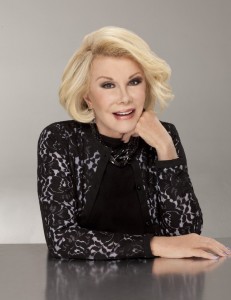 “I’ll get it from the ADL for insulting the Jews, but if I had said the gypsies, the Jews would have complained they were left out,” Joan Rivers says.

Can she tawk! And tawk and tawk. With her chin pulled up between her eyes, it’s a wonder the comedienne, fashion personality and reality TV star’s mouth still works. Making a diva’s entrance in Sixth & I’s sanctuary aisle flanked by security, Rivers spent an hour regaling an audience of avid fans with life stories, snarky comments and advice for the millennial crowd, who only know her from the E! network’s Fashion Police and Joan and Melissa: Joan Knows Best? or her weekly YouTube series, In Bed With Joan. Middle-aged folks and older fans remember her early work from Johnny Carson’s Tonight Show and The Ed Sullivan Show.

In the oldest synagogue in the District, where above the ark holding five Holocaust Torahs and “Know before Whom you stand” is inscribed in Hebrew, nothing was sacred – or off limits – for Rivers. She was there July 2 to hawk her latest book, Diary of Mad Diva, two years after a Sixth & I appearance to push another writing project, I Hate Everyone … Starting With Me. Rivers, stylishly clad in knock-off black Chanel slacks and boldly colored Etro top, sipped chardonnay while she chatted with journalist Hanna Rosin.

But as uncensored and catty as she was about current cultural icons – the Kardashians, Heidi Klum, Kristen Stewart, Helen Keller and, yes, even Anne Frank – Rivers wasn’t mercenary about book sales. Every ticket holder received a copy of the slight, easy-to-read volume with an autographed nameplate tucked inside. She said it was “too cheesy” to beg people to buy the book on the lecture circuit.

Rosin was quick to point out Rivers’ disclaimer in the diary, which was facetiously dedicated to Kanye West, who has publically eschewed reading. “Anyone who takes anything in this book seriously is an idiot,” Rivers wrote and Rosin read. “If anyone has a problem with that they can feel free to call her lawyer, Clarence Darrow.”

And then Rivers got right into her patter with a joke about Heidi Klum and the Holocaust: “I haven’t seen anything that hot since the Germans were pushing Jews into the ovens.” She felt the frisson in the room and rejoined: “I’ll get [it] from the ADL for insulting the Jews, but if I had said the gypsies, the Jews would have complained they were left out.”

Rivers’ long-held secret, coming of age and to eventual fame in the male-dominated comedy business of the 1950s, ‘60s and ‘70s, was and remains a version of speaking truth to power. “It’s a humor book, for God’s sake,” she exclaimed at one point.

And then she took down Anne Frank. Rivers began her journal when a friend told her she should write a diary like the young Holocaust victim.

“I’m nothing like Anne Frank,” Rivers rejoined, “she lived in a walk up; I live in a penthouse. She stayed home all the time; I go out shopping.”

Sacrilegious? You bet. Yet, “Everything I do, I do with humor,” the bottle blonde who turned 81 last month, explained, “because humor reminds people” of who we are and where we’ve been. And, also because life is too short and often too painful not to laugh, she added.

Rivers claimed that joking about the sacred cows – Auschwitz, 9/11, Anne Frank, Rosa Parks – is not just about laughter, but about coping. “I do a lot of Jewish jokes,” she said, “to remind people about who we are and that we’re still here … and to shake things up.”

But Rivers, too, has a serious side – nearly always hidden. She revealed that she recently received a tattoo on the inside of her arm. Inscribed in permanent ink, it reads “6M.” Six million. It’s her personal reminder that no matter how outrageous her jokes, some things can never be forgotten, or forgiven.
At a recent book talk in New York, Rivers, who is a mail-order ordained minister – “the Jews aren’t stupid enough to let me become a rabbi” – was asked to and officiated at an impromptu gay wedding. While no surprises of that ilk occurred during her hour-long chat at Sixth & I, Rivers did speak about how difficult it was to break ground as “a pretty woman” in the comedy world, until Johnny Carson gave her a big break. She remains grateful for the chance he took.

Rivers spoke pointedly to the young and young-ish women decked out in their fashionable best: “I was in the boys’ club. I was in the trenches,” she said, but times have changed and today “I have never found being a woman in this age to be a hindrance,” she said, calling the bluff of post-feminists like actress/writer and Girls star Lena Dunham. “Back then I couldn’t do an abortion joke. … I couldn’t even say I was pregnant on the air to Ed Sullivan. I had to say soon I will be hearing the pitter-patter of little feet.”

Today, Rivers lives in Malibu with her daughter, Melissa, and her grandson, where they shoot the reality program Joan and Melissa: Joan Knows Best? She is grateful for all the opportunities she’s had, and she’s become a savvy business woman with a line of jewelry sold on the Home Shopping Channel, a production company, books, comedy tours and more on her plate. “I love what I do, and I always say ‘yes’ no matter what it is.”

Has she ever gone “too far” with a joke? She doesn’t think so and said making the audience flinch let’s her know that at least they’re awake.

“Every time I can make someone laugh, it’s like giving them a small vacation,” she added, paraphrasing Winston Churchill. Plus, it’s much better than 10 minutes of aerobic exercise.

Can she tawk? Indeed.

Looking for the best Jewish news – in print and online – coming from the Washington, D.C. metro area and beyond? An indispensable source of political, international, scientific, arts and entertainment, community news, life cycle events, and more.  Turn to the Jewish news source of record in the nation’s capital since 1930: Washington Jewish Week.  Hurry and take advantage of our special offer: Get 18 months of Washington Jewish Week for just $55.00; that’s 6 additional months for the price of a year’s subscription!  Or choose our digital only  subscription for one year for only $18.  Hurry and subscribe today! Click here to subscribe.