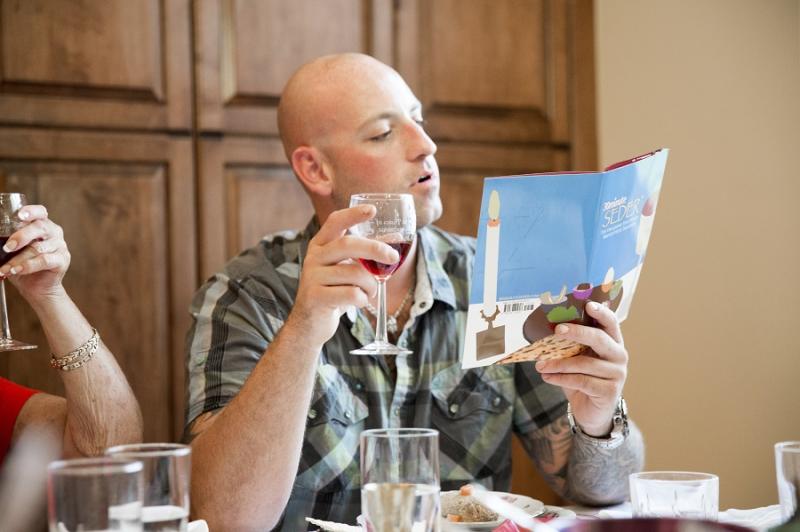 If you are leading a Passover seder for the first time this year, the key to success is to start small.

“One of my best pieces of advice for the seder is to have a number of people there that you can actually have a conversation with,” says Rabbi Scott Perlo of Sixth & I Historic Synagogue in Washington.

Perlo remembers leading one of his first seders at Camp Ramah in California when he was a rabbinic student. The scene was “pure chaos.”

”It was 150 people who had come for the week to spend Passover,” he says.

For beginners, Perlo says a better approach is to host a seder in your home. He recommends becoming familiar with the Haggadah.

“Haggadot are the most user-friendly of all Jewish books,” he says. “They give you step-by-step-instructions.”

One place to start is going to haggadot.com and designing your own Haggadah, he says. The site allows users to choose from a variety of themes and traditions. There are even templates to choose from, such as one designed by Becca Goldstein of American University Hillel for a social justice-themed seder that is focused on the Black Lives Matter theme.

“If you’re leading seder, I think your job is to make the Passover story come alive for people,” Perlo says. “That means first it has to come alive for you. Read the story and understand it in a way where the story of the Exodus speaks to you.”

Encouraging conversation is the key to a fulfilling seder, says Rabbi Laura Rappaport of Temple B’nai Shalom in Fairfax. Rappaport said the Haggadah is a script that was written centuries ago as a guide for Jews who were not sure what to talk about on Passover.

“What they should be preparing is a really interesting night of conversation about the themes,” she says. “Either their personal lives or what’s going on in society.”

This year, Rappaport will have no shortage of company — she is leading six seders, including one with her family, a senior adult seder at the Jewish Community Center of Northern Virginia and one at her congregation. She said the task of making a seder fulfilling for so many different groups is not difficult because the themes of freedom and personal journey are universal.

“I feel like a seder leader is there to facilitate an experience that is relevant for the people there.”

Rappaport says this year “welcoming the stranger” is a particularly pertinent theme as it relates to immigration and the refugee crisis in Europe and the Middle East.

Most importantly, though, she thinks about the meaning of having family together.

“Seder should not be a heavy experience,” she says. “It should connect with you spiritually and emotionally. So I think it’s a nice part of seder if you can connect with family or close friends with which you have Seder every year.”

Perlo says the Passover themes often spark lively discussion. He often asks questions such as, “Who would you be in the Passover story if it happened today?” and “Where do you see the Exodus story in everyday life?”

“The best conversations usually come up with disagreements about what the story means,” he says.

Perlo said this approach to a more intimate seder allows people to have conversations about “the biggest ideas in the world across a small dinner table.”

This year Sixth & I is encouraging Jews to host seders in their homes as part of an initiative called “Seders Across DC.” The synagogue is collaborating with OneTable, which helps people host Shabbat in their homes.

“We’d like to encourage as many people have seders in their homes as possible,” Perlo says.