Think of the word “schmaltz” and what comes to mind? Fat. As in “fattening,” “bad” and “avoid at all costs.”

But chef and food writer Michael Ruhlman wants to change that way of thinking.

“Fat doesn’t make you fat. Eating too much makes you fat,” he said on a recent visit to the District. “Fat isn’t bad. Stupid is bad.”

Schmaltz, the rendered fat of a chicken or goose, was a staple in Ashkenazi Jewish dishes in the Old Country. It was a cheap substitute for butter on bread.

But who needs schmaltz today, when there are alternatives like margarine and olive oil? We do, said Ruhlman, who spoke Feb. 6 at the Washington DC Jewish Community Center about his latest cookbook, The Book of Schmaltz: Love Song to a Forgotten Fat. The book includes contemporary and traditional recipes using schmaltz, a flavorful ingredient Ruhlman said is disappearing due to misconceptions and trendy diet fads.

Schmaltz provides a “flavor and texture you can’t get any other way,” he contended. “When we buy bad food, we’re asking for more of it. Schmaltz is good for us.”

Over the past 50 years, people have stopped cooking food and started letting multinational corporations cook for them, leading to food allergies and child diabetes among other maladies, argued Ruhlman. Making your own schmaltz – which he noted is less saturated than butter – and cooking with it is one way to move away from that epidemic.

He told his audience that becoming a chef and food writer wasn’t his original career path, although he’s glad that changed.

“Writing about food is certainly more important than what’s going on in Congress,” he joked.

A Cleveland native and Duke University graduate, Ruhlman started out as a journalist, and his first book, published in 1996, revolved around life at an all-boys school. Ruhlman had always been interested in cooking and writing about cooking, and spent time in the late ’90s studying at the Culinary Institute of America, which spawned his first book about cooking, The Making of a Chef.

After a struggle that involved “going broke every four months,” as Ruhlman put it, he partnered with revered American chef Thomas Keller, with whom he co-wrote The French Laundry Cookbook in 1999. Since then, Ruhlman has published mostly food-related books and has appeared on TV cooking shows, including The Next Iron Chef and Anthony Bourdain: No Reservations.

Ruhlman, who isn’t Jewish, learned about schmaltz from a Jewish neighbor, Lois Baron. Ruhlman was at a neighborhood party a couple years ago, when Baron mentioned that she was going to make schmaltz for the High Holidays.

Intrigued, Ruhlman took the opportunity to see what schmaltz was all about. He said Baron called him crazy for considering writing an entire book about chicken fat. But Ruhlman was undeterred and explored schmaltz-infused traditional recipes such as kugel, latkes and kishke, and modern dishes including Parisian gnocchi.

Schmaltz, he said, gave him an appreciation of Jewish culture, and stands as a reminder that fat used to be very valuable in Jewish communities in Eastern Europe.

While the best schmaltz is homemade, Ruhlman said the product found in supermarkets can be a decent option. And when in doubt, he noted, add onions. 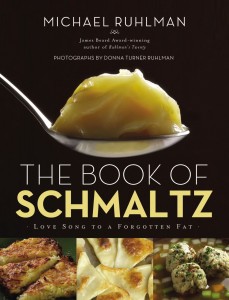 The Book of Schmaltz: Love Song to a Forgotten Fat is available on iTunes and Amazon. If you want to attempt to make your own schmaltz, check out Ruhlman’s recipe below.

Method
1. Cook the chopped chicken fat and skin in a small amount of water to begin the rendering at a gentle temperature.
2. Once the water and the moisture in the fat and skin have cooked off, the fat can rise above 212°F/100°C and the browning can begin.
3. When the skin is lightly browned and plenty of fat has been rendered, add the chopped onion.
4. Be careful not to overcook the fat. It should remain clear and yellow, not brown with an overly roasted flavor.
5. The browned skin and onion, called gribenes, are a delicious by-product of making schmaltz.
6. Strain the fat and reserve the gribenes. The schmaltz is ready to use, to refrigerate for up to a week or to freeze. The gribenes should also be refrigerated or frozen.
Yield: ½ cup/120 grams schmaltz and ½ cup/60 grams gribenes