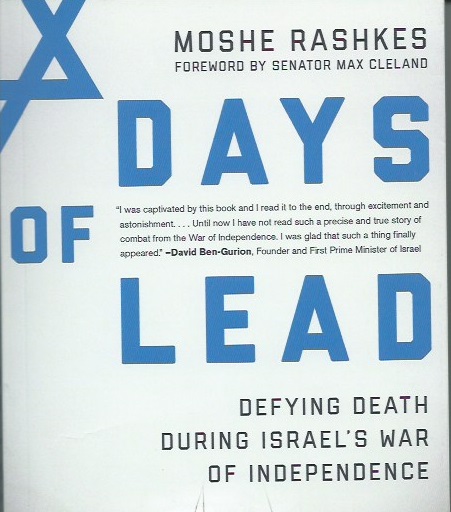 It was 1948, and Israel was fighting for its survival. Invading armies from Syria, Iraq, Jordan and Egypt were joined by thousands of Arab irregulars, all intent on snuffing out the newly resurrected Jewish state.

Teenager Moshe Rashkes was a platoon commander fighting armed Palestinians in Jerusalem and the British-trained Jordanian army at Latrun on the road between Jerusalem and Tel Aviv. “Days of Lead,” originally published in Hebrew in 1962 and now translated into English by his son, is Rashkes’ story.

Rashkes — who was severely wounded during the war — afterward served as chair of Israel’s Disabled War Veterans Association and later as head of a sports rehabilitation center in his country. He was a hero of Israel’s War of Independence, receiving a Citation of Valor, the highest such award the Jewish state bestows on its soldiers.

But this is not a braggart’s memoir. Rather, it shows Rashkes and his fellow soldiers’ warts — especially their fears and desires for revenge.

In Jerusalem, Rashkes encounters snipers as his commander shows him around. “The snipers! A hair-raising shutter passed through me. … I felt thousands of frozen needles pass over my body. There was a salty feeling in my eyes. It was hard to breathe.”

When that commander died from wounds after he was shot by a sniper, Rashkes wanted revenge.

“From that day onward I began to enjoy sniping,” he notes. “Every now and then I went out to look for targets. I lay in wait for the enemy snipers who fired at us… . I also became used to shooting at animals, and in the course of time this became a daily habit.”

Rashkes was upset after he killed his first enemy combatant. But after a friend was killed in the infamous massacre of a relief convoy sent to the Etzion bloc, he also wanted to avenge him.

“An ominous feeling coursed through me, as if storm clouds were gathering on the horizon, far, far away,” he writes. “Would something happen to me as well? I clutched the rifle firmly, intimately. A murderous desire pulsed wildly in my blood. I longed to shoot — to shoot and to destroy. I knew then that the metal weapon was part of me, part of my body. An inseparable part of me.”

He and his men were constantly cold, hungry and frightened. They also were outmanned and often faced enemies with artillery and other weapons, which the Israelis couldn’t match.

And their casualty rate was horrendous. (In a country with a population of only about 600,000 people, there were 4,000 military and 2,400 civilian deaths and 15,000 military and civilian wounded.)
Nonetheless, they persevered. That might explain the Jewish state’s victory.

In all its other wars, Israel was vastly outnumbered in manpower and equipment. However, the Jewish state could boast of a smaller army that was better trained, led and equipped.

Even in the Yom Kippur War, where Israel was surprised and unprepared and suffered enormous casualties and loss of equipment early in the war, incompetent Arab military leadership and the resourcefulness of Ariel Sharon allowed the Jewish state to emerge victorious — at least militarily.

But the IDF in the War of Independence was really nothing more than an amalgamation of militias lacking artillery, tanks or aircraft, at least in the initial stages of the war. The young soldiers’ willingness to risk — and often sacrifice — their lives was the primary reason the Jewish state survived.

“Days of Lead” tells the story of the hardships suffered by Israeli soldiers. But in a larger sense, it chronicles the suffering of all soldiers in battle everywhere, as evidenced by the fact that former U.S. Sen. Max Cleland has written the forward to this book.

The book’s atmosphere, writes Cleland who lost both legs and an arm in the Vietnam War, “enables readers to identify deeply with the author, as if they themselves were on the battlefield, experiencing the terrible pain and sensation of loss.”

If you want to understand the sacrifices Israeli soldiers made in 1948 and the horror of war in general, read “Days of Lead.”

Aaron Leibel is a former editor at The Jerusalem Post and Washington Jewish Week. His novel, Generations: The Story of a Jewish Family, which spans 1,500 years and three continents, is available online.