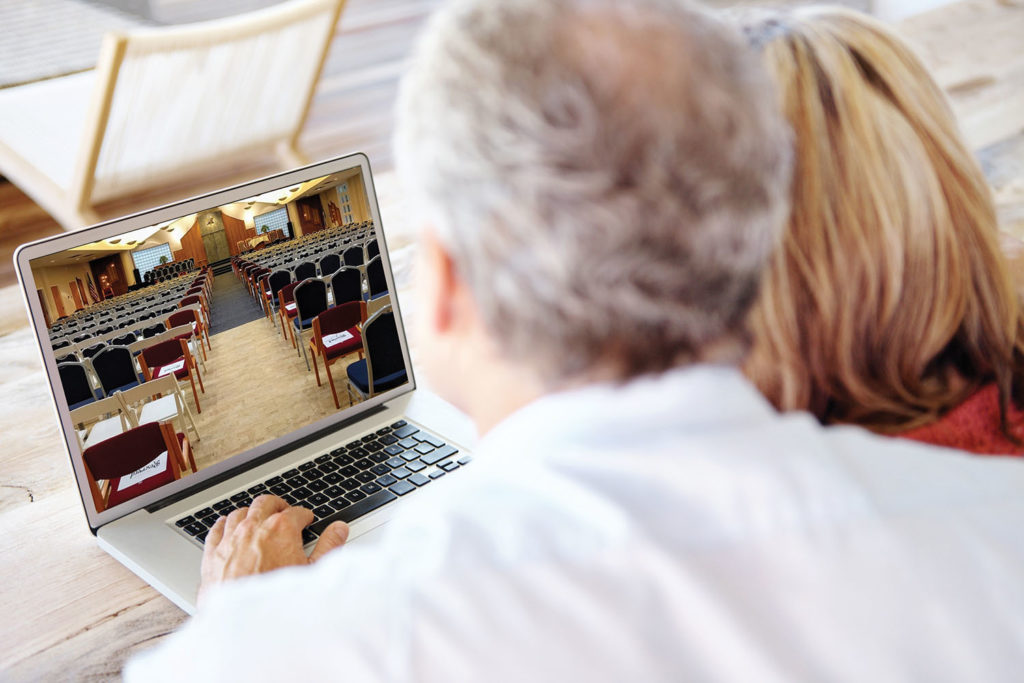 On the eve of their son Sam’s bar mitzvah, Jeffrey and Stacey Winkler of Shaare Tefila Congregation in Olney learned that the flights of some of their relatives had been cancelled. Stuck in St. Louis and in London, the family members would miss seeing Sam’s bar mitzvah.

Then congregant and techie Ira Kolmaister stepped in with a video camera, internet connection and technological know-how. Thanks to Kolmaister, the out-of-town relatives were able to watch Sam’s simchah in real time.

That was in August 2018. More and more, synagogues in the Washington metro area have begun livestreaming their services. Video streaming software is becoming ubiquitous, and platforms like YouTube and Facebook are free to use. Synagogues are seeing the new form as a way of connecting with people outside the walls of the synagogue, to meeting congregants wherever they may be.

Now, Shaare Tefila livestreams nearly all of its services, plus funerals. Kolmaister had been pitching his livestreaming idea to the synagogue board at Shaare Tefilah for nearly a decade before he streamed the Winkler bar mitzvah last year. He says streaming is a necessity for his synagogue.

“The reality is that our community is aging and more dispersed. I felt it was absolutely critical that we address the needs of those who can’t physically attend a service. One member who was very sick was able to listen to the services when their grandchild held the phone up. [The member] passed away shortly after,” says Kolmaister, who is now the chairman of the synagogue’s streaming committee.

Some synagogues stream their weekly Shabbat. Northern Virginia Hebrew Congregation, a Reform synagogue, only livestreams High Holiday services. Executive Director David Markovich says the synagogue is trying to work out copyright issues from some of the Shabbat songs they sing that will allow them to stream Shabbat services.

Those who use livestream services are usually older people, those who are sick or physically impaired, or locals who are abroad, those interviewed for this story say.
Helen Popper, a member of Congregation Beth El of Montgomery County, says she is not physically able to make it to services, but will stream them whenever she can.
“I’m in a wheelchair, [so] I can’t get to services easily. [But] as long as they’re streaming them, I’m there,” she says. “It feels good [to watch]. And this way, I can at least participate.”

Suzanne Saunders, a member of Temple Rodef Shalom, a Reform synagogue in McLean, started watching the streamed High Holiday services in 2018. She was recovering from breast cancer in Florida.

She watched on the synagogue’s website. This year, she discovered the services were streamed over Facebook as well.

“It was comforting and it was familiar and it doesn’t feel like I’m missing out,” she says.

When she watched the Facebook livestream, she found that people were commenting on the service as it happened.

“It was fun. It was more interactive than being [at the synagogue]. It’s more fun to be watching with people. It made me feel like I was watching it with community members,” she says.

Facebook’s numbers show that each of Temple Rodef Shalom’s High Holiday services had 200 to 800 views from Facebook alone.

But the biggest draw are funerals, says Bob Suslowitz, a member of the temple’s livestreaming team.
Since Jewish funerals are typically held as soon as possible after death, they’re often on too short notice for out-of-town relatives or friends to arrange to travel.

Synagogues livestream the services so anyone, anywhere can watch.

“[Funerals] are a big draw. [They] tend to come up suddenly and [have] a couple hundred views,” Suslowitz says.

While larger synagogues around the United States have been streaming services, for nearly a decade according to the Atlanta Jewish Times, most Washington-area synagogues have only begun the service recently.

Livestreaming on Shabbat and other holidays on which Jewish law prohibits work is handled in various ways, depending on congregational movement.

The Reform movement does not adhere to Jewish law, or halachah, as a whole, so the use of equipment is not an issue.

Ohev Sholom — The National Synagogue, an Orthodox congregation in Washington, only streams when the use of technology is permitted by halachah, according to Rabbi Shmuel Herzfeld. That includes Purim, when there is no prohibition on work. The congregation also livestreamed the recent dedication of its new Torah.

Shaare Tefila is a Conservative synagogue. The Conservative movement adheres to halachah has a stricter. Because Shabbat prohibitions are limited to people, Kolmaister says he developed a program that connects the livestream camera to the synagogue’s calendar. When it reaches a scheduled time, the camera goes on and off automatically.

Most other synagogues have group of volunteers who work the camera. And since the technology used for the process is getting cheaper and simpler to use, synagogues are finding additional opportunities to stream, such as classes.

Temple Sinai in Washington received a donation which it used to buy a new camera with “improved audio and visual,” says Executive Director Ellen Agler. “It’s a pretty significant investment, but I think folks are more and more used to important events being available for them to view live. There began to be a demand for better quality.”
Now, she says, Temple Sinai receives positive feedback on its streaming all the time. Other synagogues have found similar success.

“We’re at the point where we’re looking to livestream classes during the week and [to] use the platform in many new ways,” says Rabbi Greg Harris, of Congregation Beth El of Montgomery County. “How do we use the platform of the internet to allow [everyone] to be a part of the community?”

Until last year, Ira Kolmaister, a cyber security expert, had trouble convincing his fellow congregants at Shaare Torah that livestreaming was a good idea.

“Some people were opposed to it. They felt like it was inappropriate from a halachic standpoint,” he says.

Shaare Tefila observes Shabbat prohibitions on work. The synagogue board said it would permit the livestream if Kolmaister could find a way for the camera to turn itself on and off during Shabbat.

It was a lot harder than he thought.

“I spent some time looking for software. And some of the expensive software, you can’t get it to automatically start and stop.”

He called around to tech companies. None of them had the technology he needed. So, he decided to make it, together with Jeffrey Winkler, a computer programmer and Shaare Tefila member. Winkler created software that connects the camera to the synagogue’s Google calendar. All they need to do is enter start and stop times and the camera will do what it needs to.

Winkler used a software called Open Broadcasting Studio to connect with YouTube and created a code to connect the camera with the software. Kolmaister provided the hardware.

“It is very convenient that we don’t need to be there [to work the camera]. And [we also] cannot do it on Shabbat,” Winkler says. “The nice thing is now, every service has been recorded and we have copies of all the special events.”