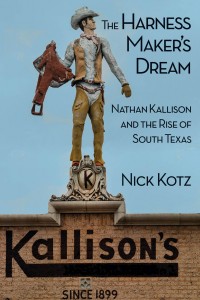 To hear Nick Kotz tell it, it was good to be a Jew in Texas at the turn of the 20th century. Especially when you consider the alternatives.

Kotz’s grandfather Nathan Kallison escaped Russia for America in 1890 as hundreds of thousands of Jews were doing. He settled in Chicago’s West Side ghetto, a cauldron of religious and racial prejudice.

Kotz, a Pulitzer Prize-winning journalist and Virginia resident, learned the story of his grandfather and found a new way of looking at American history while researching his family history that became The Harness Maker’s Dream (Texas Christian University Press), published in 2013.

“In the South and Southwest, it was much easier for Jews because they were so few,” says Kotz, who grew up in San Antonio. “Another reason life was easier was that they brought skills to Texas that were needed. Jews brought merchant skills, banking skills.”

Nathan Kallison brought his skill as a harness maker, not so unique in Russia but a boon on the Texas frontier, where he settled in 1899. Then, says Kotz, the automobile put the harness out of business. So Kallison adapted, opening a farm and ranch supply store and became a rancher himself.

Kotz, 82, worked on that ranch, driving with his uncle and his grandfather from San Antonio on Sundays and staying there during the summer.

“People in the East, when you say you were brought up on a ranch, they gasp. It was a bit unusual,” he says.

Kallison’s Department Store became a San Antonio landmark. But the family miscalculated, remaining in the city when other businesses moved to the suburbs, and finally closed the store. The family later gave and sold parts of the ranch to the Texas Parks System.

While it was easier to be a Jew in Texas than in the northern ghettos, there was a price to be paid, Kotz says. “There was an attitude you wouldn’t find today.”

In researching the book, he found rabbis’ sermons. “They said, ‘Be quiet. Stay out of the headlines. Stay out of trouble and if you do get in trouble, don’t report it to the Jewish newspapers.’ ”

Kotz was an investigative reporter for newspapers including The Washington Post. He won a Pulitzer Prize in 1968 for his reporting on unsanitary conditions in meat packing plants.

Despite a career doing investigative work, the idea of researching his own family came relatively late. He’s glad in a sense, because it allowed him to take advantage of online resources. “I could not have written this book without the fact that millions of documents are available on the World Wide Web.”

He wants to encourage others who want to investigate their family history. “If you want to do this research today, it’s easier, even with minimal computer skills.”

Kotz say that working on The Harness Maker’s Dream has changed his mind about the value of family history, whether done by a professional writer or an amateur genealogist.

“It has changed my perspective on how to look at American history. As a reporter, my focus was on the big events, looking from the top. Having done the book, I’ve learned that I can best understand the country’s history by looking at the lives of ordinary people.”