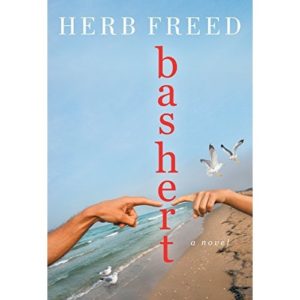 As implied by its title, “Bashert” (soulmate) is a novel about love. But it comes with a distinctly mystical bent.

Filmmakers Dan and Marion — the book’s protagonists — rush to the hospital to see the baby just born to their friends Steve and Simone.

Simone was sedated. The nurse held a screaming Molly — the new child.

“Marion’s eyes locked onto [Molly’s] gaze and she immediately stopped crying. As if in a dream, Marion dropped her wet coat to the floor and reached for the baby. …

“Marion’s face was radiant and her heart was pounding. She didn’t know whether to scream or laugh out loud but she heard the child in her arms, inches from her face say, ‘I’m here, Mama!’”

Years later, Dan goes to Jamaica to officiate at Molly’s wedding to an Ethiopian-Israeli known as Rocky, who works in Jamaica.

Rocky tells Dan how he met Molly. It was love at first sight — they met on Mount Sinai — and shortly thereafter she agreed to marry him. But before she did, she had something to do, she told him.

Two months later, she called him and said, “Everything is in place. I had the most exhilarating time with Marion [who had died some time earlier] … and we can get married!”

Molly tells Dan that she had been trying unsuccessfully to find Marion. Then she heard a voice telling her: “Darling Molly, the time has come to resume our journey.

“Suddenly, I felt myself traveling with Marion. … we were holding hands, gliding through the colors of the spectrum and flying high above the clouds, happier than I had ever been.”

Molly is not the only character who successfully navigates the chasm separating the living and the dead and hooks up with Marion.

For me, all these supernatural adventures tend to obscure the passionate love that is the central theme of the book.

Sure, love may survive death. Perhaps lovers are fated to spend eternity with each other — a prospect I’m convinced that not everyone will revel in.

But conversations between the dead and the living both smash credibility to smithereens and invite a visit from people wearing white coats.

This book may be at least partly autobiographical. The character Dan was an ordained rabbi before becoming a filmmaker; ditto for author Herb Freed.

But if it is, I hope that the best part of the novel — the riveting, stunningly realistic and frightening account of an episode of lupus suffered by Marion — is based on research and not personal experience. The description of her pain and panic, her feelings of utter hopelessness, is both superb and unsettling.

As you probably already have guessed, I’m not one for “Zen kisses” or traveling in parallel universes or apparitions singing at weddings or communicating with hours-old babies — all of which make appearances in “Bashert.”

But if those kinds of things appeal to you — and you have a sturdy neck brace — you may enjoy this novel.