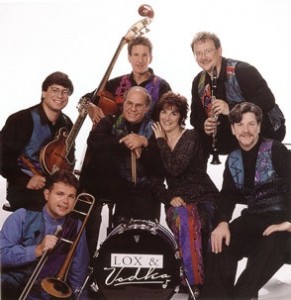 There will definitely be dancing in the red-carpeted great hall of the Kennedy Center later this month, promises Caron Dale when klezmer Lox & Vodka plays the Millennium Stage.

“Our concerts are very participatory,” she said. “We want people clapping, tapping, singing along, dancing. It doesn’t matter if anyone speaks Hebrew or Yiddish. We will teach it as we go along so everyone’s comfortable. And if not, they just yai di dai dai.” So, if the last time you danced a spirit-filled hora was at your cousin Josh’s bar mitzvah, Dale, who founded the popular simcha band, is determined to get you and everyone at the Millennium Stage up and dancing along.

While Lox & Vodka is known for its work at simchot like b’nai and b’not mitzvah, weddings, anniversary parties, this month the public can hear these energetic and highly trained klezmorim (klezmer musicians) at the National Arboretum this evening in an annual holiday concert; then again on Sunday, as the closing main stage act of the popular biannual Jewish Folk Arts Festival, this year held at the Shady Grove campus of the University of Maryland; and again on Dec. 18 at the Kennedy Center Millennium Stage.

Lox & Vodka came of age during the early years of the klezmer revival in the mid-1980s, when primarily adult children or grandchildren of Jewish European immigrants began exploring their ancestors’ musical heritage.

“We love to define klezmer music as Jewish soul music,” Dale explained. “Soul music can be upbeat or not. And upbeat can be in a minor key. It’s like when you dip the karpas – the greens – in salt water at the Passover seder. You have the spring, the hope, the renewal and then you dip them in tears because behind everything Jews do is a painful history. And that history enables us to be in the position we are today: to overcome tragedies and through fusion of music, of humor, of wonderful arts … continue to build something in the 21st century.”

For Dale and her six to eight instrumentalists, sharing their love of the klezmer form is a means of keeping connections to a disappearing Jewish past alive. But, simultaneously, Dale also takes a very 21st-century approach. For example, her Chanukah song, “These Chanukah Lights Are a Sign,” tells the story of the Jewish holiday of renewal and rededication in English using a melody based on the popular gospel tune “This Little Light of Mine.” Dale explains: “We like to do things a little differently, so basically we looked around and didn’t see any Chanukah song that felt up-to-date and told the story. So I wrote one. ”

Dale, who lives in Cleveland Park in the District and serves as a cantorial soloist at Hevrat Shalom in Rockville, grew up listening to her maternal grandfather sing Shabbos and holiday zemirot (songs), which influenced her greatly.

“We are going to get the dancing going,” she insisted. “I’ve warned people … the audience will be up on their feet. We’ll be doing a lot of singing along. And certainly klezmer music is instrumental music so we’re hoping people will clap and tap and sing along in Yiddish and Hebrew if they can. Everyone walks away with a very spirit-filled and comfortable experience.”

Lox & Vodka will perform today from 6-8 p.m. in the U.S. Botanic Gardens, United States Botanic Garden Conservatory in the District, usbg.gov; on Dec. 7 in the Jewish Folk Arts Festival, Universities of Shady Grove Conference Center,, Rockville, jewishfolkartsfestival.com; and on Dec. 18 at 6 p.m. on the Kennedy Center Millennium Stage in D.C.