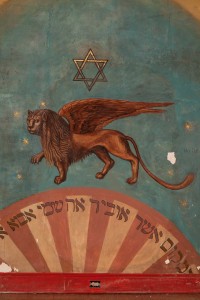 In its 160 years, a building in the Mount Vernon neighborhood of Washington, D.C., has been home to the Young Men’s Hebrew Association, the Hebrew Home for the Aged, Shomrei Shabbos Orthodox Synagogue, the Metropolitan Community Church of Washington, D.C., and private residences.

The structure will soon be converted into six condominiums. But before the construction crews begin their work at 415 M St., N.W., this summer, The Jewish Historical Society of Greater Washington has launched an all-out effort to save a large mural painted directly onto a second floor wall that includes a Star of David and a Hebrew quotation from the Book of Exodus.

The historical society has raised about one third of the roughly $20,000 it needs to pay experts to move the 12-by-12 mural, which will eventually be displayed at its new location at Fourth and G streets.

But time is limited. The builder, Blackrock Holdings of McLean, Va., plans to begin converting the three-story building into condominiums in August, and the mural needs to be moved by then if it is to be saved.

In 1993, artist and filmmaker Stephanie Slewka purchased the building for her home. While fixing up the building, “she peeled off old paint and wallpaper” and discovered the mural, explained Zachary Levine, curator at the Jewish Historical Society.

She left alone the Star of David and the Hebrew verse from Exodus 20:21, which reads, “In every place that I cause My name to be mentioned I will come to you and bless you.” However, the Hebrew is not 100 percent accurate. According to the historical society, Slewka hired artist Nicholas Kahn to repaint the Hebrew and add a winged lion. More than likely, some of the Hebrew letters were changed slightly during Kahn’s repainting.

The mural, which sits between a window and a fireplace, probably was larger at one time, extending from its current second floor location all the way down to the ground floor, Levine said.

“These types of murals are really, really, very rare,” he said. “This is the only form of this kind of Jewish folk art that we are aware of that existed in Washington, and this is just a fragment of it.”

The Jewish Historical Society traces the history of this building to the early 1860s when Joseph Prather, a butcher, moved in. Then, between 1913 and 1914, it became the headquarters for the Young Men’s Hebrew Association, and dances were held in the backyard. The YMHA evolved into the Jewish Community Center, Levine said.

Between 1914 and 1923, the building became the Hebrew Home for the Aged. The home is now located in Rockville.

“After the Hebrew Home left, a small community of Jews purchased the building and started to use it as a synagogue,” Levine said, noting that at the time there already were three synagogues clustered in the Penn Quarter and Mount Vernon Square neighborhoods, which is where many Jews lived at the time.

The roughly 20 families that created Shomrei Shabbos had the middle of the second floor removed to create a woman’s balcony, Levine said.

The historical society believes that members of this congregation either painted the mural themselves or had someone paint it for them. “We don’t know who did this. We don’t know if it’s an amateur or a professional. All we know is this was a piece of folk art” that was common in Eastern Europe, Levine explained.

The historical society has spoken with former members of that synagogue, “but they were so young, they don’t remember much,” Levine noted.

When the synagogue moved north in the late 1940s, to Fifth and Decatur streets, the building became a Baptist church. “In a sense, it was a break away from a church that did not allow women to preach,” Levine said. The Church of Jesus Christ operated out of the building from 1947 to 1980.

Next came the Metropolitan Community Church of Washington D.C., which ministered to the LGBT community.

Then, in 1993, Slewka moved in and lived there until she sold it to Blackrock Holdings last year. That company has begun some demolition work but has been careful not to touch the mural.

“We just didn’t want to knock it down. It’s really pretty,” noted Patrick Moran, managing partner at Blackrock. “We are so happy this is working out the way it is.”

To contribute to the historical society’s effort, go to jhsgw.org/savethemural and click on the donate button.