Blending various grape varietals to create a beverage that is greater than the sum of its parts can often seem like magic. Especially after half a bottle.

The Hebrew word for “magic” — kessem — is also the name of a delicious Israeli blend created by Shuki Yashuv, owner and winemaker of the Agur Winery.  Kessem is also an anagram, in Hebrew, of the principle grapes Yashuv uses in his wine: cabernet sauvignon and merlot (also with a little cabernet franc and petit verdot). The Agur Kessem 2011 is a finely crafted wine, epitomizing Yashuv’s approach to blending which he characterizes as a “caress” of the grapes at his disposal. Beginning with violet and plum aromas, its blackberry, cassis and dark cherry flavors intermingle along a medium frame with soft tannins and some interesting spiciness along the lengthy finish.

Shuki Yashuv is considered a winemaking maverick because he eschews single vineyard and single varietal wines. He believes that the best way to express the essence of the Judean Hills region he works in is by blending grapes. Agur’s current annual production of 30,000 bottles is released under the Kessem, Reserve, Blanca and Rosa labels. The winery became certified kosher in 2007.

Spirits-wise, following the slightly maverick vibe that memory of tasting wines with Shuki Yashuv elicits, we thought we’d once again consider the latest single-cask, single-malt selections from the Single Cask Nation, the society and private label of the Jewish Whisky Company. We’ve extolled the virtues of the Single Cask Nation whiskies before, and doubtless will do so many times more (keep up the great work fellas). 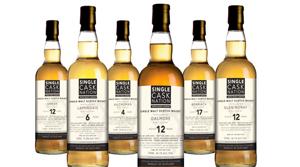 The Jewish Whisky Company, based in Connecticut, is the commercial brainchild of Joshua Hatton, Jason Johnstone-Yellin and Seth Klaskin. The company is set up as a private membership society “faithfully dedicated,” to use their own words, “to selecting and bottling the world’s finest and rarest single casks of whisky (and other spirits), under its private label, for exclusive sale to the members of Single Cask Nation.” We are very happily both members.

Besides identifying proudly as Jews themselves, the founders of the Jewish Whisky Company are determined to remain sensitive to those kosher-observant Jews for whom wine-cask usage in the maturation of whisky is deemed problematic. So while they do not operate under rabbinic supervision, they make a point of releasing some awesome single-cask bottlings that are free of the wine-cask concerns, and for the other casks they choose that did involve used-wine barrels in their maturation, they make a point of detailing the wine-cask aspect on the label and in the whisky descriptions so that folks can make an educated selection. Each bottling is separate and self-contained, thereby preventing one bottling from, in their words, “contaminating the kosher-styled expressions.”

Far more important, especially for those of us who rely on those poskim (Jewish legal decisors) who are not concerned with the potential wine-cask usage issue, is that the Jewish Whisky Company explicitly recognizes, and makes a virtue of strictly adhering to, the Passover restrictions against Jewish ownership of chametz during the holiday. Upon request, they will happily provide “documentation of the contract” for the sale of their chametz as arranged through a local Orthodox rabbi. As we’ve noted previously, to our minds at least, this helps elevate the Jewish Whisky Company from merely Jew-ish, to more properly Jewish.

Just as an aside, the Jewish Whisky Company also hosts an annual whisky-tasting event that includes a great many other whisky companies and far too many different whiskies to list here. They call it the “Whisky Jewbilee.” This year it will be held on Oct. 9 in Mount Kisco, N.Y., and also on Oct. 10 in Manhattan. Visit the event website for details (whiskyjewbilee.com). Also, as a special bonus to our readers, if you mention code “WJW13” in all caps, you will get a discount on the price of admission no matter where you happen to read this — so feel free to spread the word!

There are currently just six whiskies available, and each of these alone is well worth the cost of joining the Single Cask Nation (check out their website for details at http://singlecasknation.com). Membership includes one full-size “welcome bottle,” and the opportunity to buy more. Here are the three newest releases:

Single Cask Nation, Glen Moray 12 year old, ex-bourbon cask matured, Single Cask, Single Malt Scotch whisky (56.1 percent abv; $100; Cask #797 yielding only 148 bottles): This is probably the best example we’ve tasted in many years from this typically underperforming distillery — and it is delicious! It exhibits all the very best elements of the classic Glen Moray house style but with greater depth and complexity than is typical, including vanilla, toffee, butterscotch and caramel notes, with zesty lemon citrus to counter the sweetness and keep it lively, and a little pensive spiciness from the oak. With time it develops even further, with some compelling fruit, cream, and nuttiness, and a pretty, slightly floral component that asserts itself a bit in the pleasingly long finish. It is light, fruity and slightly sweet, but oh so pleasing — really lovely!

Single Cask Nation, Laphroaig 6 year old, ex-bourbon cask matured, Single Cask, Single Malt Scotch whisky (57.8 percent abv; $85; Cask #119 yielding only 269 bottles): Right out of the gate, this offers a lovely, peaty, smoky tang — but milder, slightly woodier and far less medicinal than is typical from this distillery. What it gives up in initial punch, it seems to make up in complexity. As the initial waft of smoke on the nose dissipates, honey, brown sugar, and something like pecan wood smoke elements start to develop. From there the pace is leisurely and the route is slightly exotic, but the overall effect is enchanting with additional notes of banana, baked apples, cereal grain, butter, toffee, walnut and even some menthol dancing in and out of the all-encompassing but not overwhelming smokehouse-type smoke. The finish is a little short, though the smoke and menthol linger a bit — nicely warming the mouth and throat, and slightly anesthetizing the tongue. It is a wonderfully solid, absorbing if slightly milder example of Laphroaig!

Single Cask Nation, Dalmore 12 year old, Pedro Ximenez Cask Finished, Single Cask, Single Malt Scotch whisky (46.1 percent abv; $95; Cask #6951 yielding only 238 bottles): After 12 years aging in a used bourbon barrel, this was transferred to a Pedro Ximenez sherry wine cask for 10 months of finishing. This is an excellent example of how a PX finish can be so much more than simple razzmatazz! With a sugary, dessert-like opening of caramel, brown sugar, honey cake, and sweet, stewed fruit, this opens to reveal the rich, full-bodied Dalmore whisky in all its glory with notes of orange, chocolate, coffee, vanilla, and winter spices. The spice and citrus counterpoint helps keep the primary sweetness in check, emphasizing more of the mocha (chocolate/ coffee), while the winter spices help tether it all together. This is sweet, spicy, and a little flashy, but a fully satisfying, substantive and robust whisky. For those who like their Scotch sweet but far from “girlie,” look no further.