Since they began quarantining, people have complained that they can no longer tell one day from another. But Malka Zeefe has committed herself to studying a page of Talmud a day, so no two days are the same.

The 41-year-old Alexandria resident picked up the first tractate of the Talmud in January, when the new Daf Yomi, or daily page study, cycle began. Then came the coronavirus and the stay-at-home orders. Spending her days with her husband and two sons has made it more difficult to drink from the words of the ancient rabbis.

“Before the pandemic, I was doing a single page every day. Now I’m doing a bouquet of pages every few days,” is how she puts it.

Zeefe is also an attorney with the Dentons law firm and is co-founder and executive director of the patient advocacy organization Postpartum Pelvic Health Advocates.

She says she studies Talmud primarily by herself and supplements her readings with commentaries from MyJewishLearning and Sefaria.

“There are [discussions] that are specifically about washing your hands,” she says, a topic that might not have seemed as crucial just a couple of months ago.

Zeefe’s father, Arnold Resnicoff, a Conservative rabbi, and her mother, Barbara Shore, passed their love for Judaism on to their daughter. Resnicoff was a Navy chaplain and Zeefe was born in Japan. She attended Jewish day schools every time the family relocated to a place with a large enough Jewish community.

But when Zeefe was between the ages of 4 and 6, the family lived in a small Italian fishing village. Her days were split between a Catholic school and an American school.

She became a bat mitzvah on a military base in Pensacola, Fla.

“In college, I started veering and started exploring and figuring out other things,” she says.

She continued to keep kosher, although her other Jewish practices changed.

And when it was time for her older son to start religious school, she decided it was time to join a Jewish community. Although Conservative synagogues felt more familiar to her, Reform Beth El Hebrew Congregation seemed like a better fit.

“This has brought a refreshing, optimistic and affirmative aspect to my practice of Judaism,” she says of the Alexandria synagogue. “I also love and admire the social justice component of Reform Judaism.”

When it comes to Talmud study, hand washing is not the only talmudic debate that rings of current events. A discussion of types of oil and wicks used for lighting candles also offers insight into coping with the limitations of the pandemic, she says.

“Some rabbis would only use very expensive very special olive oil and not everyone can afford that,” she says. “Now, it’s not easy to get all the groceries you want, make the recipes you want, but it’s still necessary to create holiness with what you can find.” 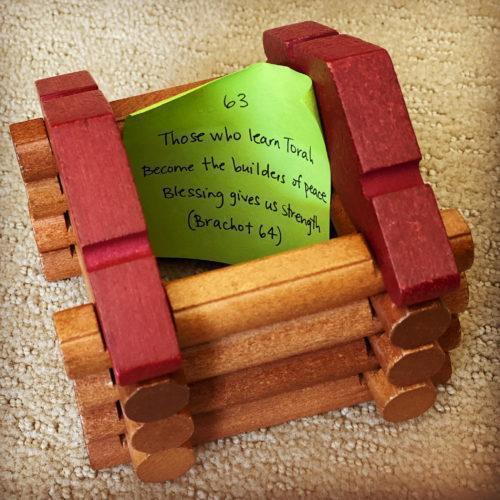 She wrote a haiku in response to the passage:

Even in tough times
We all need holy moments
Light with what you have.

Zeefe says she has always enjoyed haikus because of the way they incorporate math and language. She wrote daily haikus to count down the 40 days before her 40th birthday.

And when she began Daf Yomi, she began writing a haiku a day to distill what she learns. That led to @DafYomiHaiku, an Instagram account that she says helps keep her accountable. She has 224 followers.

“When you start the Shabbat tractate, it begins with the idea of domains and drawing the lines between domains — private domain, public domain and domains in between,” she says.

Social distancing
Getting to know our domains
And where to draw lines.

Sophie Panzer is a writer for the Philadelphia Jewish Exponent, an affiliated publication of Washington Jewish Week.