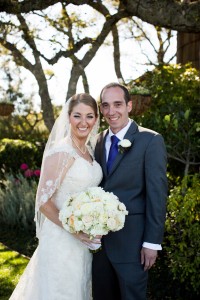 Ellen-Sue and Neal Brown announce the wedding of their son, Mark Jared Brown of North Laurel, to Heidi Allison Littman on Oct. 13, 2013, at the Thomas Fogarty Winery in Woodside, Calif.  Heidi is the daughter of Wendy and Joel Littman of Sunnyvale, Calif., and the granddaughter of Gladys and Jacob Angel of Elk Grove, Calif., and Muriel Littman of Menlo Park, Calif.

The groom graduated from Richard Montgomery High School in 1999. He is a graduate of the University of Maryland and holds a master’s degree in information systems from Johns Hopkins University.  He is a manager with Infosnap in Bethesda.

After a honeymoon in Thailand, they reside in North Laurel.