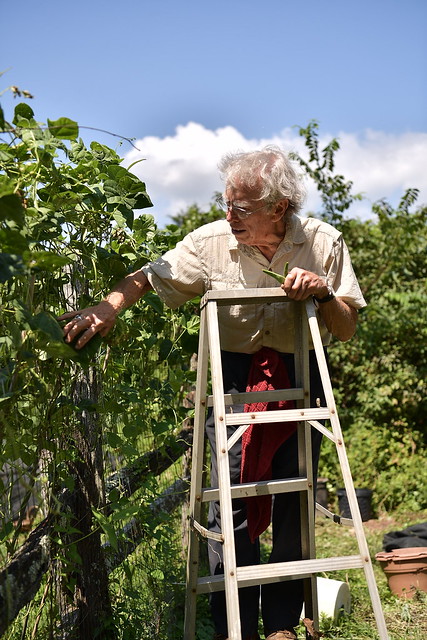 When Mark Israel was diagnosed with lymphoma in June, he thought he would have to give up farming.
Enter members of Israel’s synagogue, Beth Chai in Bethesda, who signed up to work on the 1 acre organic farm in Potomac so Israel could keep it running.

“Someone gets sick, and a friend. And your impulse is to say, ‘I want to help.’ But what do you do? What do you do to help?” said Israel, 81. “I didn’t need someone to come in and just sit by the sick bed. This gives people a chance to do something that’s basically fun with the kids, that helps the situation. And I think people were eager to find that.”

Israel said in the month since he put out the call, about 30 families from Beth Chai, a Humanistic congregation, have come to help on the farm. Others volunteers are from Community Supported Agriculture, the community through which Israel sells his produce to private customers.

“I love it,” Israel said about having volunteers on his farm. “Because most people do a little bit of gardening, they’ll have one tomato plant and they like to talk about it.”

The visits — about 80 total — have given him the chance to renew old friendships and begin new ones.

“For a small congregation, the response has been really mighty,” member Michele McNally said.

Israel began seeking medical tests in May, and found out he had cancer — though the doctors couldn’t figure out what kind even after an MRI and a CT scan. Finally, after a “bigger biopsy,” they realized it was the uncommon nodular lymphocyte-predominant Hodgkin lymphoma.

His main symptom has been fatigue, but he said he is not experiencing symptoms right now. Still, he will undergo more specific tests soon.

“Meanwhile, I would I like to see if I could exclude that deer from the garden,” Israel said. “You take your problems as they come along.”

Israel also has to protect his produce, so Karyn Stenzler of Beth Chai and a friend put together wire fencing to cover mature lettuce.

“It does make you realize the amount of labor that goes into farming, especially on a small organic farm,” Stenzler said. “I think [volunteering here] made people a lot more grateful for the food we eat.”

Being an organic farm does require more work, Israel said, because there are standards under which the produce must be grown. But he wholeheartedly believes in not using toxic pesticides, and said the produce simply tastes better.

Having volunteers complete these tasks helps Israel cross things off his to-do list, he said.

Israel spends more time than he expected harvesting and filling bags for CSA customers, who pay yearly in advance for produce from April through Thanksgiving.

“Without the help, I would have had to do some refunding,” Israel said. “I just would not have been able to produce enough food.”

Israel has been selling to CSA customers for “10 or 15 years,” and farming commercially for about 25. He retired from public sector lobbying in 2003.

Getting Beth Chai involved was Rabbi Deborah Bodin Cohen’s suggestion, because Israel’s fatigue and constant doctor appointments kept him from tending the produce as usual.

“It seemed pretty obvious that our congregation could help,” Cohen said. She said Beth Chai engages in a lot of community volunteerism, but this is unique because it directly helps a member of the congregation.

On Friday, Cohen’s two sons helped search for potatoes by using a pitchfork to overturn dirt. The golden starchy vegetable came out in many sizes, and the boys exclaimed whenever they found a particularly large one.

Stenzler and Atkinson, who have both previously worked on the farm with their children, said Israel is very good at delegating tasks and knowing what jobs will be good for kids.

“It’s great to talk to Mark to find out we’re really helping him,” Cohen said.

On Friday, he had cantaloupes growing, large beans on the vine, and some squash ready to be picked. As the volunteers pulled weeds and covered produce with shade cloths, Israel walked around to check their progress on various parts of the fields.

“People say civil society is dead,” Israel said, glancing around at his friends and volunteers. “Civil
society is alive and well. Just look.”