Alef Bet Montessori School has been awarded a $112,000 grant to expand its prekindergarten program as part of a state-funded program designed to expand the number of 4-year-olds who attend school. Alef Bet was one of three schools in Montgomery County, and the only Jewish school in the state, to receive money from the Prekindergarten Expansion Act of 2014.

Some 24 schools received a total of $4.3 million so that 1,563 more Maryland children may attend preschool and be ready for kindergarten, according to Lt. Gov. Anthony Brown’s office.

“This Prekindergarten Expansion grant builds upon the existing public prekindergarten system and moves us even closer to the target goal of providing universal access to high-quality prekindergarten for Maryland children of all income levels,” Lillian Lowery, state superintendent of schools, said in a statement when the grant was announced last week. “It’s very exciting, very, very exciting,” said Ellie Lichtash, executive director and founder of Alef Bet, which is located in Bethesda and is accredited both as a Montessori school in America and Israel.

Lichtash said her school will not be changing its curriculum and will continue to be a school for 3-year-olds through sixth-graders with “very strong Jewish content. Hebrew is part of our second language program,” she said.

Children do not have to be Jewish to be accepted into the school, but all students will receive the same programs and education, she said. “We are inviting everyone,” she said. Funding is for the upcoming school year, and recruiting will begin soon, she said. Children eligible to participate must be from families who earn up to 300 percent of the federal poverty guidelines. 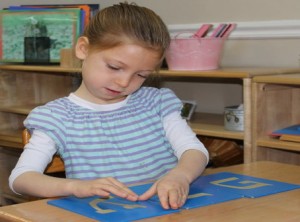 Under the grant, Alef Bet will be adding 20 students. Lichtash believes her school was invited to participate because it already has met most of the requirements. It holds school five days a week for six hours, is accredited and its teachers have master’s degrees.

The hardest part of applying for this program was the application itself, she said. Alef Bet opened in 2005 and originally operated out of the Aish Center for Jewish Learning in North Bethesda.

In December 2013, it moved to the former Weller Road Elementary School on Grosvenor Lane. The school leases that building from Montgomery County. The school offers hands-on learning in math, reading, arts, prayers and the daily parsha. Students move from station to station when they are ready to proceed. Rather than tests, students prove to their teacher that they have mastered a skill by teaching that skill to a fellow student.

Alef Bet is accredited by the Maryland Department of Education and the Association Montessori Internationale and is a member of the Washington D.C. Association of Independent Schools.

The other two schools in Montgomery County that received $114,000 grants were the Academy Child Development Center in Rockville and CentroNia in Takoma Park. 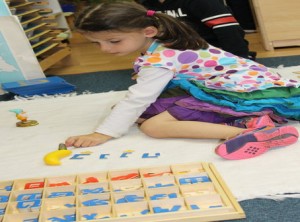