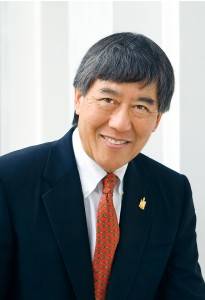 On May 2, University of Maryland Hillel will honor the school’s president, Wallace Loh, with a Shabbat dinner and musical entertainment. This is the second time in as many years that Hillel is celebrating Loh, whom the campus student organization considers a longtime pro-Israel advocate and friend of UMd. Participants at the free-of-charge dinner will include students, faculty, Jewish community leaders and Hillel donors.

Loh is no stranger to Hillel. “President Loh joins us for our opening [barbecue] for more than 1,000 Jewish students each September,” said Shuli Tropp, Maryland Hillel’s director of institutional advancement. At the barbecue, Loh helps students “to understand the critical partnership between UMd. and Maryland Hillel,” she said.

The Jewish Leadership Council, a group of nine UMd. students who serve on the Maryland Hillel board, “are taking a key role in coordinating their peers to be a meaningful part of the dinner and reception,” said Tropp, who is coordinating the event for Hillel.

Council members will speak during the evening and have arranged for students to be matched with guests who are unfamiliar with the community and campus, “to help them navigate Shabbat at Maryland Hillel,” Tropp said.

“Like all of our events, students are an integral part of what we do on campus,” said Ralph Grunewald, a co-president of the Maryland Hillel executive committee. “They are very involved in organizing the events of the day.”

Both Loh and his wife, Barbara, will attend the Hillel reception.

Following services (there will be regularly scheduled Orthodox, Conservative and Reform options), Loh will address the community. Tropp said that Loh often speaks of the “strong and very positive relationships with Israeli universities.”

Loh joined Maryland Gov. Martin O’Malley (D) on a trip to Israel and Jordan in 2013 to pursue new partnerships and strengthen existing ones with Israeli institutions and universities. He has condemned academic boycotts of Israel.

Loh’s talk will be followed by a Jewish a cappella performance, after which there will be VIP reception for donors and student and community leaders. The evening will end with a dessert reception.

“As a staff and board, we [at Maryland Hillel] feel strongly about strengthening and honoring our university partnerships,” Tropp said, “and this is a great way for the students and the community in general to understand that critical partnership. This program comes as a means of honoring this relationship.”

“We’ve got a very special president,” Grunewald said, “who has been very close to the Jewish community on campus, in particular Hillel.