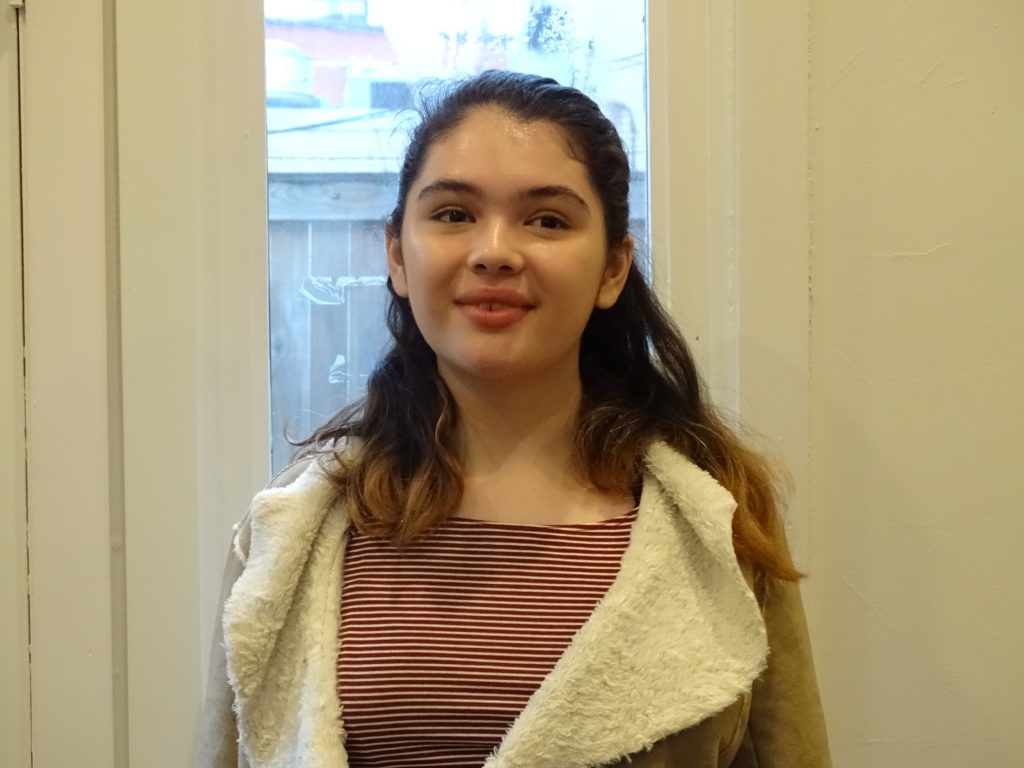 Fifteen-year-old Gabriela Orozco writes poems that focus on her identity. As a Jewish girl who is the daughter of immigrants — her mother is from South Africa and her father is from Nicaragua — she has a lot to say on the matter.

“It makes for a pretty unique experience, in my opinion,” she says.

Identity and “carving out spaces” for that identity, is one of the biggest trends in poetry right now, Gabriela said, and she wanted to write “something about my perspective as a Jewish-Latino person.”

Some of her poems only touch on one aspect of her identity while others focus on multiple parts. She hasn’t completed many either, only “eight or 10,” she says, although she has many others that are unfinished.

Still, those poems that led Urban Word NYC and the D.C. Hip Hop nonprofit Words, Beats, & Life to award Gabriela the title of 2019 DC youth poet laureate at a contest last month at the Kennedy Center.

Gabriela, a sophomore at The School Without Walls in Washington, says she was stunned when she won.

“I was not expecting that,” she says. “I didn’t enter to win. I entered to do well and have a learning experience, because I was [one of the younger contestants.]”

She will be getting a book deal, where her poems will be published and be given a spot on the Kennedy’s Center’s Youth Council. She says she will also have the opportunity to meet with previous winners who work together to improve each other’s poetry.

Although she described herself as being a creative child who was always daydreaming and coming up with new imaginary worlds, she didn’t become interested in poetry until she took a creative writing course in eighth grade.

“I saw how all these poets were up on stage speaking their truth,” she says. “A big trend in poetry right now is talking about your own identity and that’s always been important to me.”

That encouraged her to apply this year. She says she submitted five poems and was invited as a finalist.
One of the poems she submitted is “Yom Kippur.” She describes it as her “most Jewish poem,” and said it is about being a better person and leading a more fulfilling life. It is also one of her favorites.

The poem ends: “Yet I can’t stop dreaming of the days when I’ll thrive/To be honest some days I don’t have the drive/ Because I know that suffering is part of being alive/ Then I realize it’s also about learning to strive.”

The idea came from a High Holiday tradition at her congregation, Hill Havurah, where members share poetry during services.

Gabriela and her twin sister, Sarah, had their b’not mitzvah at the Sixth and I Historic Synagogue in 2016, the same synagogue where their baby-naming ceremony was held. “Hill Havurah didn’t get a rabbi until like two days after our b’not mitzvah,” Gabriela says. “And my mother really wanted it to be in a synagogue.”

She still attends services at Hill Havurah and is an assistant teacher at its religious school. She also thinks Rabbi Hannah Spiro is “really cool.”

It’s mutual. “Gabriela is an insightful, thoughtful, curious and compassionate young person,” Spiro says. “She is a mainstay at our Shabbat services and is a courageous and creative thinker.”

“Jews in some ways are a people of immigrants and [I write about] how that relates to my experiences as a Latina. [My poetry] shows people that Judaism is not mutually exclusive of one particular background.”

One of her poems deals directly with this topic and how some people assume that she isn’t Jewish and the effects of her Latina background on her upbringing:

Much of the poetry Gabriela enjoys is by Latino and Latina poets. She enjoys the book “The Poet X,” a story in verse about an Afro-Latina girl in Harlem who finds her voice in a slam poetry club.

Gabriela’s poetry style, however, is her own. Unlike most contemporary poetry, her work rhymes. For her, it’s about having a format and a beat to follow.

“If I didn’t have a format and a strict rule to adhere to, that I imposed upon myself, it would be like releasing a torrent of feelings and words and emotions on a page and I would have to make it make sense. It gives me a challenge and it increases my vocabulary.”

She pauses before adding, “Plus, I like the way it sounds.”

Other than that, Gabriela is just focusing on being a high schooler. She participates in Model U.N., watches “Parks and Rec,” reads alternate history novels (particularly those set around World War II), hangs out with her twin, babysits her younger stepbrother and spends time with her friends.

“D.C. has everything I need. I has a cool political scene, a cool literary scene and it has a good, vibrant Jewish community and I definitely want to stay here.”