Ralph Shapiro is 92 years old, but age doesn’t slow him down when he is working.

“I never retired,” he said, sitting at the dining room table of his Leisure World apartment in Silver Spring.

The table is covered in books — some of which he authored — a photograph of his late wife, Ecille Pierce, who died two years ago, and papers with meticulously organized notes about the details of his life. (If he cannot recall a detail, he refers to appropriate texts to jog his memory.)

Shapiro, who lives in Leisure World,  is hardly one for idleness. His hypothesis about his longevity is: “When the mind is engaged in something challenging, the body is never tired.”

Shapiro graduated City College of New York in the 1940s with a degree in mechanical engineering. He was rejected from the draft because of poor eyesight. After getting married in New York and spending several years working for General Electric and a television antennae company, he made his way down to Silver Spring in 1960.

The company he initially joined folded its Maryland operations and returned to its headquarters, but Shapiro choose to not follow the company. His neighbor, who worked at NASA, gave him several contacts to call seeking work.

“I called one of them and he invited me for an interview,” Shapiro said. “I told him I was an industrial engineer.”

Shapiro was rejected for that job, but several weeks later he called another contact on his list. This time he emphasized his experience with projection equipment.

At that time NASA was building a satellite to photograph the Earth, and needed projection equipment to view the photographs.

“He said, ‘Ralph, that’s what we need. Call so-and-so and tell him to hire you,’” Shapiro said.

“So-and-so” ended up being the man who initially rejected Shapiro.

Nimbus satellite and a proud moment

The first Nimbus satellite launched on Aug. 28, 1964. Its mission was to assist scientists in meteorological research and development. After spending four years helping NASA prepare to launch the satellite, Shapiro became the mission operations manager, in which he worked with scientists to determine which tools and functions the satellite would perform. 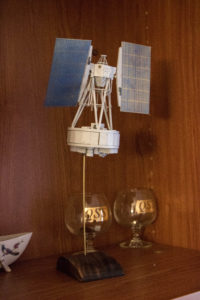 The week of the launch, Shapiro was in Fairbanks, Alaska, where NASA had one of its control centers.

As Shapiro coordinated the launch with other NASA stations around the world, he could not help but think about how a “little Jewish boy from the Lower East Side” ended up running this world-wide operation.

“I’ll never forget thinking about that,” he said.

Following the launch, Shapiro barely slept for the next two days, anxious about what could go wrong if he left his post unattended.

But what Shapiro describes as his proudest moment did not come until 1977.

By that time Nimbus was utilizing global positioning systems. One of its tools could track animals, so Shapiro asked a programmer to develop a software to receive data from Nimbus and locate a target.

“After a month or so operating it, I got a call,” Shapiro said. “‘Ralph, we got two balloonists who were trying to fly with a hot air balloon’” across the Atlantic.

Max Anderson and Benjamin Abruzzo were making their first attempt at a trans-Atlantic trip in a helium balloon. The two were blown off course by storms.

Shapiro was able to help locate the balloonists using the Nimbus satellite, and they were rescued off the coast of Iceland. The duo later visited him and other Nimbus operations staff to thank them. Anderson and Abruzzo finally succeeded at a trans-Atlantic trip in 1979.

Nimbus was used for search-and-rescue thousands of times, most famously tracking British aviator Sheila Scott during her first solo flight over the North Pole in 1971. It also tracked Japanese adventurer Naomi Uemura on his first attempt to be the first person to dogsled solo to the North Pole through Greenland.

A career after retirement

Shapiro technically retired from NASA in 1983 due to an impending tax law signed by President Ronald Reagan that would have negatively affected him as a government employee.

But “he waited until the very last day he couldn’t work anymore,” his son David said. “He’d rather be working if he can. He loves it.”

That retirement lasted one week.

Shapiro’s new career was in proposal writing and reviewing in which Barney Gorin, Shapiro’s longtime colleague, said “the government will give you a 10-page question and ask for the answer in one page.”

It’s an occupation filled with fine print and following the minutest of details. The government provides a book that instructs companies on how to submit an application to provide a service. The catch is that the book is tremendously large and applications must be filled out with precision, down to the correct font and type size.

It ended up being a good fit for Shapiro, who has a massive appetite for detail. In the early 2000s he published several books: one was a biography chronicling his life from his childhood on the Lower East Side through his career at NASA. Another book, the self-proclaimed “history buff” said, examined the history of the Jewish peoples.

“I can remember very vociferous arguments [with Shapiro] over the meaning of a comma,” said Gorin. “Every detail had to be right. Nothing was small enough that Ralph was going to let it go.”

Gorin worked with Shapiro as recently as last month on a new proposal. While Gorin’s “ego is in ribbons” by the time he finishes with Shapiro, he knows he has not missed anything.

So how does Shapiro do it?

“When the mind is working, my body is so energetic,” Shapiro said. “I don’t have any problem when I’m doing my proposal work — working 10 hours a day creatively. And so, I’ve learned that if I keep the mind going, I believe it helps me keep the physical body going. That’s my thesis.”

Today, Shapiro’s workload has lightened, but he is as energetic as ever.

There is one pleasure he enjoys these days: dancing with his “lady friend” and neighbor who lives two floors below him.
“You should have seen me last night!” he said with an ear-to-ear grin. “It rejuvenates me.”