There are echoes of the fiery Hebrew prophets in “999: The Extraordinary Young Women of the First Official Jewish Transport to Auschwitz.” As the prophets rebuked the Jewish people for straying from God and abandoning his commandments, so author Heather Dune Macadam blasts the Nazis as she chronicles the fate of the nearly 1,000 Jewish teenage girls from Slovakia on the first transport to Auschwitz.

With words almost thundering off the pages, she slams the Nazis’ evil deeds, excoriating them, holding them accountable for their barbarous behavior.

More often than not, the object of the author’s wrath is the misogyny that overlay the women’s condition.

Despite her vociferous condemnations, Macadam said in an interview that she is not angry. But she is appalled by the women’s treatment.

“The first victims of war, of genocide are women,” Macadam, 60, said. “Women are the nurturers of the race. Unless we learn to treat women as equals, we are doomed to recreate the past.

“This is untold history,” she added. “I want readers to understand the importance of these women.”

In many places, she noted, women are still second-class citizens.

She credits the MeToo movement as partially responsible for the book’s publication. She said she has been trying to tell these women’s story for some 25 years. “And now this story has taken off. But 10 years ago, no one was interested in this. So [women’s status] is changing, and I think this is really important.”

The examples of misogyny that she chronicles in the book are damning.

Auschwitz commandant Rudolph Höss, for example, blamed the female prisoners for their own terrible living conditions. 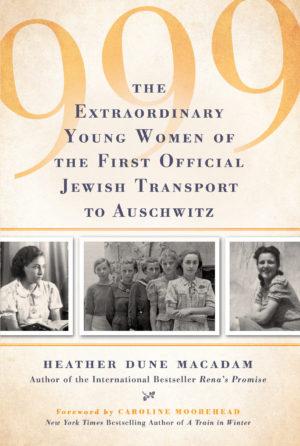 “Holding female prisoners responsible for their own misery speaks volumes about the camp’s misogynistic system and its overall contempt for women,”
Macadam writes. “But then, Jews were not even considered human; being a Jewish woman was the lowest of the low.”

Why were young unmarried Jewish girls sent to do construction work? the author asks. “Who suggested it [sending unmarried girls]? There seems to be no one man to blame, but it was certainly men who made the decision. Did they laugh when they invented the official reason for the first transport: to provide a workforce to ‘build housing’ for more Jewish laborers? Who brings 999 girls to work on a construction site?”

In death, men and women prisoners were treated differently in Auschwitz.

When men died, their names and numbers were recorded; women who died generally remained anonymous.

Of course, we are dealing with Nazis whose inhumanity made everything else seem insignificant. A few incidents in the book are so brutal that they require no commentary. Dr. Izak Kaufmann had accompanied the girls on their trip to Auschwitz and complained to the SS about the conditions they had endured on the train. A Nazi hit him with a whip and when he fell, SS members kicked him to death.

Much later, another SS soldier brutally murdered a Jewish Hungarian boy arriving in the camp who had begged for and been given water by one of the Jewish girl inmates. When the young women with whom she was working refused to say who was responsible for giving the boy water, the soldier executed 60 of them.

Macadam, who comes from a Quaker background, grew up knowing that her family had a farm house that was part of the underground that hid American slaves fleeing to freedom in the North. “That’s part of the family lore,” she said, “and I grew up knowing that. I remember asking my mom when I was a kid if it meant that we would have hidden Jews during World War II and she said, ‘Absolutely.’ ”

Macadam had previously written a book about the experiences of two sisters in Auschwitz (“Rena’s Promise”). She was in Slovakia in 2012, the 70th anniversary of the first transport, and connected with a family that had never been able to determine the exact fate of their family member who had been on the transport.

She put a form on her website that people could fill out if they knew somebody or were a relative of somebody on the first transport. Shortly thereafter, she started receiving names and photographs.

“I thought there are so many people out there who have no closure — who don’t know what happened to their girls,” the author said. “To me, it is the most important part of the book — to identify these girls who disappeared off the face of the earth” and to tell their stories.

There is no official number of survivors of the first transport — a minimum of 40 survived and probably 80 is a good guess, she said — but by the time she began her research, not many were still alive. Some of them refused to be interviewed as did some of the children and grandchildren of the survivors, Macadam said.

“It’s really individual,” she said. “Some survivors want to talk about it, as do some children. Others don’t. Everybody has a different level of being able to cope with trauma.”

Macadam is also director/producer of a documentary film with the same name as the book.

Heather Dune Macadam will discuss her book at Ohr Kodesh Congregation in Chevy Chase on Jan. 13 at 7:15 p.m. For information and registration, go to habermaninstitute.org.