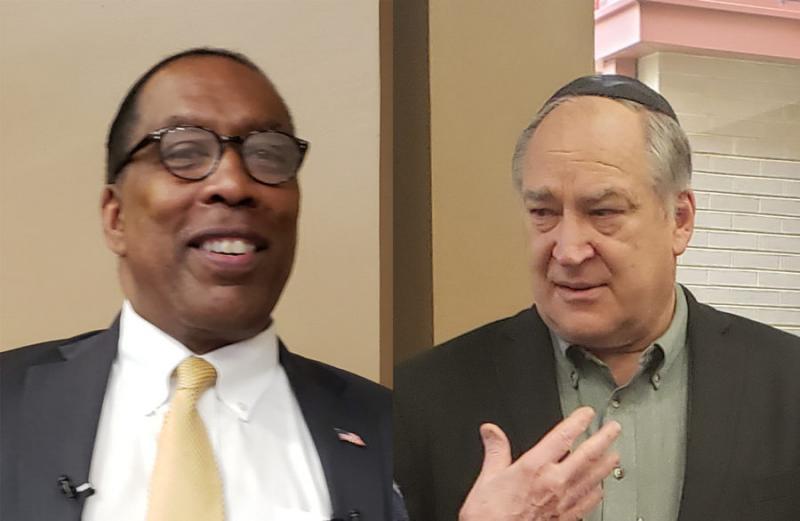 The crowd at a political forum on Sunday between the candidates running for Montgomery County executive was decidedly on the side of Reardon Sullivan, the Republican challenger of incumbent Marc Elrich.

Elrich, a Democrat, had an often hostile reception from the audience of 150 people at B’nai Israel Congregation in Rockville, while Sullivan frequently received cheers and standing ovations.

According to the rules of the political forum, there was no interaction between the two candidates. Instead, they each talked separately about their positions and accomplishments and then answered audience questions that were submitted on index cards.

Sullivan, a Gaithersburg resident, spoke about the need to deal with rising crime, called for returning police officers into Montgomery County Public Schools and making the county more business friendly.

Both candidates were asked how they felt about the County Council’s as-yet unsuccessful attempt to pass an antisemitism bill.

The resolution, which defines and reaffirms the county’s position against Jewish-targeted hate crimes, was first proposed at the end of July.

According to several councilmembers, the wording of the resolution is being “fine tuned” so that no one believes their free speech will be stepped on if they criticize Israel. According to the definition the resolution is based on, certain kinds of anti-Israel speech can fall under the heading of antisemitism.

Sullivan said he supports the current expansion of I-270. Elrich said that state plan “won’t solve the problem” of growing traffic on the highway and that he favors reversible lanes during rush hour.

If elected, Sullivan said he will reward energy-efficient companies through tax incentives, but that he would not require any specific emissions reducing benchmarks, which the county currently does.

The Republican, who spoke first, said carjackings are up, and “MS-13 is taking control” of the Germantown area.

When it was his turn, incumbent Elrich spoke about his achievements during his first term. He was elected in 2018.

He said that the county is finally recovering from the 2008 recession, and that the current county budget is his first one that added programs.

Elrich stressed that that he helped bring rapid transit bus lines and a new homeless shelter here. “This is the first time we’ve been able to almost get all the homeless off the streets,” he said.

Under his administration, more than half of the new business contracts went to small-business owners and the biotechnology and Artificial Intelligence sectors grew, he said.When Amazon settled in Northern Virginia rather than Montgomery County, Elrich said he realized that while Maryland and the county offered more financial incentives, Northern Virginia offered a better talent pool, with more graduate-level research positions.

Since then, Elrich said, he has worked to bring higher level technology and science classes to the county, through the University of Maryland. “We are beginning to see a change in our footprint” for job talent, he said.

While COVID-19 and the county’s mask mandate were only briefly mentioned, the majority of the audience made it clear that they strongly opposed masks and the closing of schools during the pandemic.

Elrich said he was proud that the county has a high vaccination rate and a low death rate due to COVID-19, adding, “I’m a Democrat. I am not going to apologize for that.”

Concerning the police, Elrich said the county now has five teams of mental health workers that can respond to police calls that the police don’t need to be involved with, including homelessness issues.

Sullivan said the police are suffering from low morale, and he supports funding the police. He also said that members of the Police Accountability Board should either understand police work or at least have driven with police. He said Elrich wanted to put activists on that board.

Elrich noted that the current budget that he proposed included raises for the police.

Elrich said his budget also increased the amount given to the school district, noting that “you are dealing with a population you didn’t used to have.” He was referring to students who enter the schools without being fluent in English.

At that point, a few audience members shouted out “illegals.”

Both candidates grew up in the county and are Montgomery County Public Schools graduates.

Sullivan said the schools must improve, and students need to graduate proficient in math and other subjects. He added, “I believe parents should have unfettered access to what they [the students] are learning.”

Several times, Sullivan called for the end of identity politics, urging people to view others the same, regardless of their political party, race or other characteristics.