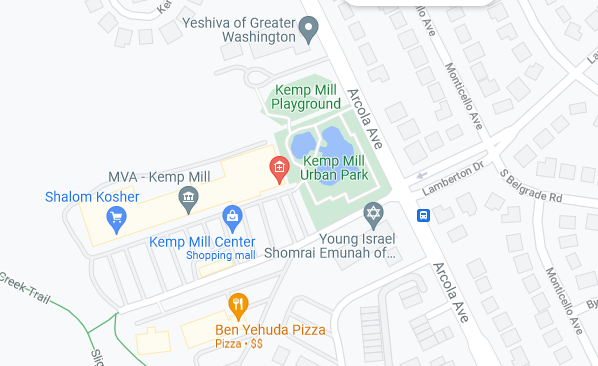 “The current district map is a clear error that will dilute the voice of our distinct community,” testified Kemp Mill resident Ira Unger during the Nov. 16 county council meeting.

Under the proposed redistricting map created by the bipartisan Montgomery County Commission on Redistricting, Arcola Avenue separates District Five and District Six. Many Kemp Mill residents would live in one district and shop, attend synagogue and eat at kosher restaurants in a different district.

Council member Hans Riemer acknowledged as much during a county council briefing on Nov. 6. “Kemp Mill, it’s not kept whole. I just want to flag that,” he said.

Opponents of the redistricting plan say that Kemp Mill is a “community of interests” and should not be divided. They also voiced concern that their community influence on the council will be diluted between two elected officials. But others pointed out that the community could have twice as much representation on the council.

District Six occupies the east-central portion of the county. It includes Wheaton and Aspen Hill. It also is home to Forest Glen, Glenmont, Rock Creek and Derwood.

Commission on Redistricting member David Stein noted that there are several communities that feel divided, including Kemp Mill, North Bethesda and Derwood. However, he noted, “Some of these communities are just in people’s minds.”

He added, “Kemp Mill is a good example. It is not completely intact,” but in order to not divide it and still keep to the required population count of about 150,000 residents per district, several other districts would have to be changed.

Districts also must be compact and contiguous. Ethnic and racial groups have to be distributed in such a way that they are not packed into one district or split up so much that their voices are diminished.

Each district has its own council member. There also will be four at-large members who represent all county residents.

Council member Sidney Katz reminded residents, “Just because you can’t vote for someone, they will still represent you.” The council, he said, “is not an island. We are a big place, but we are not an island from each other.”

Redistricting in the county is done every 10 years. Voters approved increasing the number of county council members from five to seven while keeping the four at-large seats.

Carole Silvermetz also believes dividing Kemp Mill is “an error.” District Six includes Berman Hebrew Academy and the Orthodox community of Aspen Hill, so it makes sense to keep all of Kemp Mill in District Six, she said in written testimony. “Kemp Mill children comprise over half of Berman’s enrollment, and the welfare of the Aspen Hill area is central to the welfare of the school and, hence, our KM community.”

She noted, “What happens in Wheaton affects up all directly. It makes no sense to divorce Kemp Mill from our neighbors there.”

Howard Kern also submitted written testimony to the council, noting that the commission “cracks” the community.

The area’s Orthodox Jewish community members “consciously share social concerns and needs for government services that transcend membership in specific synagogues or schools, as well as members’ economic circumstances,” he wrote, adding,“Community members are not insular, by the way, and, for example, stand side-by-side with non-Jewish Kemp Mill community members in preparing and distributing free food at the Antioch Reformed Christian Church on Arcola Ave. in response to COVID.