Between them, Moshe Rappaport and Michael Henesch have 70 years of experience working as mohels in the Washington area, performing tens of thousands of ritual circumcisions.

And though the pandemic rages on, Jewish boys continue to be born. And when they are eight days old, their parents want to enter them into the Jewish people with a mark symbolizing God’s relationship with the Jews. As God told Abraham in Genesis: “My covenant in your flesh is to be an everlasting covenant.”

It’s customary for a father to circumcise his son. But the father can ask someone to perform the circumcision — known as brit mila or bris mila — in his stead. That’s where the mohel, or circumciser, comes in.

“It’s definitely an essential service for Jewish families, the Jewish people,” Henesch said. “There are many cases where we [mohels] try to perform this mitzvah. We walk in the snow, we walk in the rain, we drive hours sometimes to perform a bris.”

When lockdowns began in the spring, Henesch began telling parents he couldn’t do their son’s brit mila. Even though the ritual is supposed to be performed eight days after a boy is born, many families waited several weeks for Henesch to resume his work. And when he did, things changed. Masks came on, social distancing was enforced and only the parents were allowed to be present for what was once a large celebration. He’s since started allowing grandparents and other immediate family members to attend, but it’s still a small operation.

“My responsibility is to try to be as safe as possible,” Henesch said. “When I’m asked to come into an environment that I’m not comfortable with for the safety of the baby or myself, I decline, or I tell them what the conditions are.”

Rappaport said circumcisions can be small ceremonies. But even when all the requirements have been fulfilled, it often feels like something is missing.

“What’s been the most challenging is that I have not been able to shake hands or hug fathers or hug grandfathers,” said Rappaport. “After a bris is finished, everybody’s relieved and there’s happiness and there’s closeness and touching and shaking hands, and that hasn’t happened since COVID. That’s really been a real challenge for me.”

A lot of the pomp has gone away — or gone virtual.

“There could be 150 people in Zoom,” Rappaport said. “Sometimes, the people on Zoom, sometimes it’s a rabbi who will say a few words and sometimes it’s a relative. I once had a relative from Israel who was on Zoom and he’s the one who named the baby, from Israel. In the past, before all this, Zoom would never be used. If they couldn’t make it, they just wouldn’t be part of it. Now people can participate in this unique way.”

Both Henesch and Rappaport work hard to assure parents of the levels of safety they take in their job, especially during the pandemic. They say their challenge is convincing families against having a non-ritual circumcision in the hospital.

“I will tell you that a certain segment of the communities I service have markedly reduced the number of brises,” Henesch said. “The drop has been very, very extreme.”

Circumcision rates in the United States among the general population are dropping, too, according to the Centers for Disease Control.

“It’s a lifetime investment, this bris milah,” Rappaport said. “And it’s one of the few mitzvahs that has this lifetime guarantee. It stays with them and it helps this person during his lifetime. It’s not just a physical procedure. It’s a procedure that creates a lot of spirituality for the person, for the family and so forth.”

There is a halachically permissible “do-over” ceremony, known as a hatafat dam brit, that can be done if someone had a secular circumcision. It’s also a ritual many male converts go through. It’s hard to tell at this point if there will be an increase of those in 2021.

But in 2020, there’s no stopping Henesch and Rappaport. The singing and dancing may be on hold, but the covenant remains.

Henesch said operating in difficult times is a bit of a mohel tradition.

Henesch said one silver lining is that the lack of celebrations has led him to lose 20 pounds.
“I’ve eaten a lot fewer carbs, a lot less bagels.”

Justin Regan is a freelance writer. He produces the American Rabbi Project podcast. 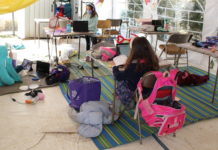 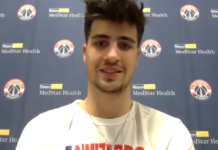 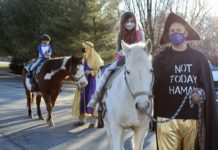