As he flipped a sizzling meat patty atop a gas range, Nathan Sacks explained the art of cooking hamburgers.

“It’s all about smashing in the first 30 seconds,” he said. “What you get when you smash is a golden brown crust. But you get a super-moist, rich inside.

To achieve the Shake Shack imitation, Sacks used a recipe from “The Food Lab” by Kenji Lopez-Alt that gives instructions on how to achieve the restaurant’s signature moist, juicy core. He also made his own Shack Sauce using ketchup, mayonnaise, pickle juice and a hint of cayenne pepper. For the side, he served crinkle-cut fries.

Sacks formed four-ounce balls of ground beef, smashed them in the frying pan and spent about five minutes browning each side, checking the temperature every so often with his cooking thermometer. He finished off the patties by adding black pepper, cheese and onions, so that the flavors would melt into each other inside the skillet. There was soy cheese for those who don’t mix milk with meat.

“Andrew, can you grab me the soy cheese from the fridge please?” he asked resident Andrew Roan, as the first batch of burgers began to brown.

As the night went on, smoke from the stove and the accompanying aroma of beef filled the house. Roan said it was because of Sacks’ interest in burger grilling that the Moishe House residents had the smoke alarms removed.

The taste packed even more flavor than the smell.

“Well, it’s salty. It’s juicy. It has all the right components,” said Washington resident Heather Gillies. “It’s honestly one of the best meals, and I’d eat it again.”

“This is good stuff,” he said after his first bite. “I think this is better than Shake Shack. It has a little more flavor to it.”

As attendees sipped beer and socialized about work, travel and the common attributes of those who exp 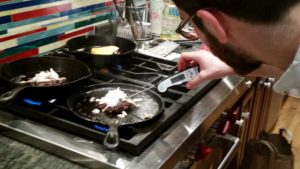 erience middle-child syndrome, Washington resident Eli Feldman paid Sacks the highest compliment, joking that he might “have a future in flipping burgers.”

The event was the third the house has held using Lopez-Alt’s recipes. “We might continue it because his recipes are all so good, fattening and unhealthy, and that’s my ideal meal,” Sacks said.

Roan joked that he wasn’t worried about Sacks’ health.

“His cholesterol is perfect,” he said.